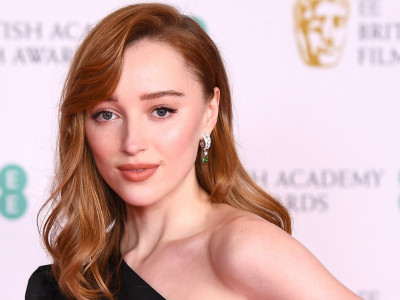 Phoebe Dynevor's new hair is about to be the talk of the 'ton.

On July 9, the Bridgerton star posted a series of snapshots from a recent adventure in New York City. Buried within the post — on slides two and five — Dynevor debuted her new brunette lob with blunt bangs. This is a pretty dramatic change from the long, vibrant reddish-blonde hair that her Bridgerton character Daphne has become known for.

Though Dynevor did not call extra attention to her hair transformation by marking it in the caption or even showing it off in the first slide, fans took notice of the change in the comments. "Babe the hair!!!!!!!!" one verified commenter replied, while one wrote, "DARK HAIRED PHOEBE ERA?" One fan described Dynevor's hair as a "badass vibe look."

Dynevor recently tried on brunette locks when she attended the 2022 Met Gala in May, wearing a stunning, sheer Louis Vuitton dress with long, uniform brown waves cascading down her back. However, she appeared to be back to red by June.

At the Met Gala, Phoebe Dynevor was reunited with Regé-Jean Page, who played her onscreen husband, Simon, the Duke of Hastings, in Bridgerton season one. Though Dynevor returned for season two of the sexy period drama, Page left the show to pursue other roles. “We've come a long way since that first chemistry read in LA Mr @regejean,” she captioned a black-and-white snap of the pair on Instagram.

Despite rumors that Page would make a return for season three, which will focus on the love story between Penelope Featherington (Nicola Coughlan) and Colin Bridgerton (Luke Newton), the Gray Man actor took to his own Instagram to dispel the notion. "The boys are back in town. ❤️," he captioned a photo with his former costar Jonathan Bailey. "(No, I’m not going back to the show btw - the papers made that one up.) But we had the best, and most stylish, catch-up I've had in a while over some truly excellent Italian coffee and sunshine ☕️."

With or without Page, the new season of Bridgerton can't come soon enough!

This story originally appeared on glamour.com.

Now, watch how to rock a shag cut with curly hair: