House Music Is Back. Let's Remember Its Roots. 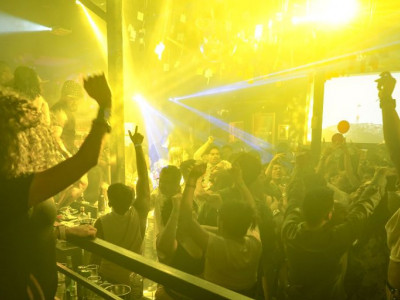 First things first, house music is Black queer music. A vehicle used to transcend earthly troubles and a soundtrack for the disappearing of bodies on dance floors snatched up by the AIDS virus. Music found at weekly parties and weekly funerals. Contemporary Negro spirituals. The ballroom culture surrounding house music provided a sanctuary for people who were kicked out of their homes, shamed into silence, and at times shunned by churches, mosques, and cathedrals. House music spoke to "the children" who, when expelled from their biological families for being gay, found protection and belonging with chosen families. They formed queer kinships with parental figures in places like New York City, Detroit, D.C., Baltimore, and Philadelphia. So, when Mr. Fingers penned and produced one of the first of many house anthems asking the question “Can You Feel It?” it was far from rhetorical. And when Marshall Jefferson ordered people to “Move Your Body” in his equally epic anthem, it was a rhythm directive. DJs and house music producers, some queer and some straight, were calling on witnesses of the AIDS crisis to grieve and groove.

I coined the term DJ scholarship in 2013 to explore the Black queer roots of house music. My curiosity about house feels like a form of respect, a living altar I create every time I compose a house mix. Yet never before in my three decades as a DJ have I experienced it being part of such a fiery national dialogue. Within one week, Beyoncé released a new single featuring Big Freedia, and Drake dropped a new house-inflected album featuring South African house music producer Black Coffee. This unexpected turn of events opened up larger questions about commercial vs. underground culture, racism and sexism, and ownership and authenticity. But where does the story of house music begin? Given the varying factors involved with its formation, the story is by no means linear. I'll share one of them.

In the 1970s, Chicago promoter Robert Williams recruited the legendary Bronx-born Frankie Knuckles to start a club called the Warehouse in Chicago for predominantly Black gay men. But Knuckles wasn't the first choice. Williams wanted DJ Larry Levan, a magical music conductor, producer, and thought leader in designing one of the most pristine sound systems in New York City. Levan was the minister of music for the predominantly Black and Brown gay patrons at the famous membership-based Paradise Garage club. Williams traveled from Chicago frequently to hear him spin. And Williams wasn't the only supporter of Levan's willing to travel. Among the thousands of attendees who danced at the Paradise Garage between 1976 and 1987, you could find Eartha Kitt, Madonna, Basquiat, Keith Haring, and Grace Jones partying with the same fierce focus. Still, Levan passed on the opportunity to leave the Paradise Garage for Chicago. Instead, Frankie Knuckles accepted the offer and left New York City in the late ’70s. Shortly after, he became the official resident DJ for Robert Williams's Warehouse parties.

While locating the origin of any genre of music is slippery and complex, plenty of evidence suggests that the early-1980s underground club scene in Chicago is where the term house found a home. Frankie Knuckles, who was eventually crowned the Godfather of House Music, recalled seeing the term in a record store window for the first time between 1980 and 1981. Incidentally, around the same time, the first AIDS cases were reported in Los Angeles in five young gay men. When Knuckles asked a friend from Chicago what house music meant, the friend explained how the record store was advertising music that could be heard at the Warehouse parties where Frankie Knuckles spun. House music then referred to the disco, gospel, funk, and soul Knuckles played at his party.

It's arguable that Frankie Knuckles is the godfather of what is called Chicago house music today. The DJ known to have premiered the earliest known Chicago house tracks was Chicago native Ron Hardy. Hardy incorporated the music of Chicago's aspiring electronic musicians into his sets at the Music Box long before Knuckles did. These songs were made using secondhand synthesizers and drum machines to create sophisticated four-to-the-floor musical patterns, typically at the tempo of 120 beats per minute. Hardy and many early house producers were the grandchildren of Black Southerners who migrated from places including Mississippi, Georgia, and Alabama to Chicago, looking for a break from the segregated South and for work on the assembly lines in Midwest factories. As a result, there's a musical legacy connecting rural blues to urban electronic music. Perhaps the most famous music migrant was Muddy Waters, one of the first Mississippians to move to Chicago and plug his acoustic guitar into an amplifier, changing the course of blues music. Twenty years later, young Chicagoans cultivated a new mode of soulful electronic music making from the Muddy Waters moment and changed the course of Black dance (house) music.

At the core of house music is joy, a rhythmic theory of escape, accentuated by what could be called fatal pleasure—the war on drugs and addiction, coupled with dangerous freedom marked by a lurking "big disease with a little name." The presence of Black women DJs and vocalists makes house music unique, even though too many of these women are erased from the early house music narrative. Stacey "Hotwax" Hale traveled between Chicago and Detroit modeling turntablism to the young men who would come to be known as architects of early Detroit Techno. DJ Sharon White of New York City was among the few women who spun at the Paradise Garage. Ultra Naté not only offered her voice to hundreds of house tracks but also turned her attention to the turntables to make sure her name would become part of history. I'm also grateful for the many unnamed house producers, DJs, dancers, and promoters whose voices we will never hear because they passed too soon.