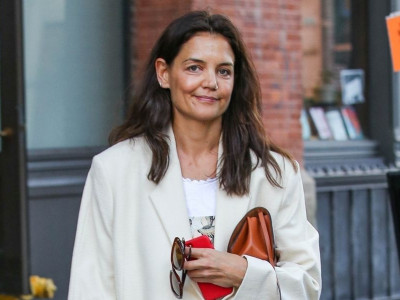 Katie Holmes made spring-summer dressing look easy this week when she stepped out in a breezy floral look and the prettiest flats.

The Alone Together star was spotted leaving her New York City apartment yesterday and hopping into a black car that was waiting for her.

Her look consisted of a semi-sheer white maxi dress with a floral design in soft peach and desert green. She paired the flowy piece with an oversized ivory blazer and square-toe powder-blue flats by Yuni Buffa. Carrying a slouchy brown bag and matching sunglasses, she kept her hair down for the outing and wore minimal makeup.

Speaking exclusively with BAZAAR.com earlier this month, Holmes described her style as "pretty simple" and said she only got into fashion through her acting career. "We live in a world where we have a premiere and you want to look nice, and it turns into being a fashion person," she said.

And though in the past several months she has continuously surprised us with her effortlessly chic looks on and off the red carpet, she said the closet staples she cannot live without are her old tees. "I love my T-shirts, and I love my vintage T-shirts. They're so yummy. They're a little dirty, a little stained or whatever, and that's me," Holmes said.

In the past several weeks, Holmes has made various appearances with new musician boyfriend Bobby Wooten III. They even made their red-carpet debut as a couple at The Moth's 25th Anniversary Gala last month, to which Holmes wore a bright orange ruffled dress by Jonathan Simkhai and black strappy heels. Wooten complemented her ensemble in a cool dark teal suit with black accents by Paul Smith.