What Is Margot Robbie's 'Barbie' Movie About? 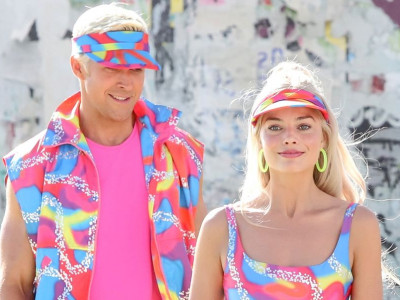 In case you've missed it, we're getting a live-action Barbie movie. This doesn't seem to be a film aimed just at kids: Margot Robbie signed on to play the world's most famous doll, and the director is Greta Gerwig, who has received praise—and three Oscar nominations—for her unapologetically feminist, emotionally resonant work in films like Little Women and Lady Bird.

Ever since first-look images of Barbie and Ken (who will be played by Ryan Gosling) were released back in April, the Internet has been on a mission to find out what exactly the movie will be about. We do know that the cast will be star studded: Kate McKinnon, America Ferrera, Simu Liu, Will Ferrell, and Issa Rae will all make appearances in the film. Thus far, the only official insight into what the film will be about is a single sentence on the movie's IMDb page: "A doll living in 'Barbieland' is expelled for not being perfect enough and sets off on an adventure in the real world."

An additional (but unconfirmed) snippet of a potential plotline from World of Reel went viral on Twitter recently. It claims that in the film, Barbie grows disillusioned with the real world after discovering the challenges of being a live woman (sexism, unrealistic beauty standards, et cetera). But conflict arises when it becomes clear that Ken loves his IRL experience—while still loving Barbie. Oh, and at the same time, an evil Mattel CEO (played by Ferrell) is on the move to get the plastic couple back to Barbieland.

Considering the film is set for a summer 2023 release date, we still have a while to go before an official trailer will be released. Until then, we'll have to be satisfied by the House of Gucci–esque daily on-set paparazzi photos showcasing neon '80s athleisure, pink cowgirl jumpsuits, and a perfectly himbo-fied Ryan Gosling. We can't wait for more.