'Good Luck to You, Leo Grande' Is Changing the Conversation on Aging and Sex 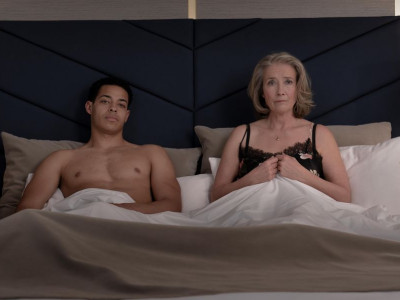 With a prolific career that has spanned four decades and garnered two Academy Awards, Emma Thompson is no stranger to delivering awe-inspiring, critically acclaimed performances on the big screen. But while her illustrious résumé includes Sense and Sensibility, Howards End, Love Actually, Nanny McPhee, and Saving Mr. Banks, Thompson’s latest outing finds her baring it all for the first time—both literally and metaphorically.

Directed by Sophie Hyde and written by Katy Brand, Good Luck to You, Leo Grande, which is now streaming on Hulu, follows a middle-aged, widowed, and recently retired religious education teacher named Nancy Stokes (Thompson) who, after a lifetime of sexual repression, decides to hire a charming, young sex worker named Leo Grande, played by Peaky Blinders’ Daryl McCormack. Though they might not be a conventional match on paper, Leo uses his skills to help Nancy experience a life-changing sexual awakening, leading the pair to form a surprising human connection in the process.

“Nancy has spent 30 years looking down on these young people that she’s teaching—young people who aren’t that much younger than Leo,” Thompson tells BAZAAR.com. “But in this instance, she looks up. I know that sounds sort of, well, shallow, but actually, with a pedagogue like Nancy, a teacher who’s normally right, Leo teaches her so much. There was something very powerful about the act of looking up.”

In a joint Zoom interview, Thompson and McCormack speak about the film’s revolutionary depiction of female desire and sexuality, the importance of consent and communication in intimate encounters, and how their characters help to “unlock” a new part of each other before going their separate ways.

Daryl McCormack: I felt like it started to happen quite organically for both of us. I think we both really were aware [of] how much we needed to trust each other in order to go through this film together, because it does bring us to such places of vulnerability, but as people, we needed to just feel like we were totally safe in each other’s hands. I think we just started analyzing who these people were and knowing that they were individuals in a room, and in a sense how the piece brings them to a place where they’re very parallel and that they actually cross and go off in different directions by the end of the film.

Personally, it was mainly just developing a sense of comfort with Emma as an actor, because for me, it was very daunting at first. But the more we got to know each other, the more we could just speak, and I think the essence of ourselves just fed into the characters.

Emma Thompson: That’s right, absolutely. It was a very sort of organic process, and we were very much thrown together—all of us—because we shot it in lockdown [in 19 days]. Norwich, the city we shot it in, which is quite small and beautiful, felt so quiet. It was like it was there for us alone, and we walked around on our own, and we had very little time off, and during that time we were running the lines and trying to work out, “Who was passing who? What is happening here?What’s happening?” Because it is two people in the room, but it’s not a play. It wouldn’t work in the same way as a play, because you need the infinite landscape of the face and the body to go right in there. And Sophie’s intention of making us feel one another, feel like you’re in the room with them, feel what it’s like to be them—this is something that only movies can achieve.

DM: With Leo, I really wanted to convey the sense of power that I felt they have found in their vocation. We were really lucky to speak to a handful of sex workers that were honestly inspiring, going into a profession that very much can be dangerous, they were able to just draw such authority and such boundaries for themselves to work in a safe environment, to then offer something of what I felt was beautiful value. I just found that completely admiring, and so my hope really was just to carry essences of all of them into Leo, and just hope that that sense of self and that sense of Leo having gone on a journey to find out who he is as a young man behind just being a sex worker, that I was embodying that in the room.

ET: That’s a really good question. It’s a good question for all of us—isn’t it?—with regard to our relationship with mirrors, which I don’t think are the best invention. [McCormack laughs.] They’re hard, shiny surfaces reflecting a hard, shiny version of the self, and actually they are very good things to cover up from time to time and forget about so that you can reenter your body and be inside it. We talk about the male gaze and the female gaze and objectification, but we objectify ourselves every time we look in a mirror. We go, “Oh, I’m over there, reflected in that surface.” But is that you? Is that how you feel? It’s so interesting.

When Nancy looks in the mirror, you can see her, she can see nothing but faults, and Leo is standing behind her going, “You can’t see any beauty?!” And he’s trying to help her, and she gets angry and says, “You know what? I suppose you spend a lot of time in the gym,” because she feels less than, and then they have a kind of spat. The mirror provokes reactions. But then at the end, when she looks at herself in the mirror, she’s finally able to use a kind of neutral gaze that says, “This body is mine now. It’s mine again. I own it, and I live in it. It’s given me this beautiful moment of unbridled, unboundaried pleasure, and I gave that to myself, because this young man saw that I could do that.” It’s such a touching, essential, and private moment. So it was very, very moving to do. [Turns to McCormack.] But your looks in the mirror are so different.

But Leo is very different. I think his moment in the mirror is something that catches him off guard and something he doesn’t really anticipate. And it’s that thing where you see the surface level, and it kind of throws him into certain spirals of shame that he knows he’s grown past and he knows that he’s better than, but I just thought it was so interesting because, despite him showing such an almost perfect image, he still [has those] struggles.

DM: I think it’s just such a beautiful moment in the film, because I think Leo’s main objective is to lay a safe foundation for Nancy to explore this and to feel that she has authority over it, too, and that she has access to ask for what she wants and to go and explore what she wants.

It’s such an amazing moment, because it kind of catches you off guard. I think there is a moment where she just feels relaxed, and all she does at first is feel his arms, and I just think it’s really beautiful to invite consent into that, because it really does become part of her desire to explore these experiences. I really felt like it does honor what sex workers do as well, which is lay the foundation for their client to go and have the experience that they want.

Katy did a really good job of making sure that consent is that navigating factor, because—we were just saying this—it adds to the sexiness, knowing [that] somebody wants something and that they ask and someone says, “Yes,” and then it continues. It propels that feeling of like, “This is right, this is what I want, and we’re allowed to ask for what we want.”

ET: The eroticization of consent is hugely important in this movie. It’s very erotic to say to someone, “Is this okay?” And then for that person to say, “Yes.” It’s such a beautiful moment when Leo says, “Yes, of course. Yes, you can touch.” And she’s partly curious because she’s never felt a body like his before, but also she’s overwhelmed with this desire, with this lust—and she can’t even cope with it! She has to sit down and take a step away! Because that’s the first unlocking, actually, in a way, when she just goes, “Oh, my God,” [and] this [feeling] comes up inside her. It was such a beautiful thing to play.

ET: I decided to look at some old paintings. I went to the medieval paintings of Eve, because I thought, “This is a kind of prelapsarian moment for Nancy. She’s gone back to a kind of God.” She describes, “My body’s now a garden of delights,” or, “a paradise of delights.” And I thought, “What does that mean? What does she mean?”

She found herself in this new place where she can feel pleasure inside this body, which has become like a sort of garden to her. So I went and looked at pictures of Eve, and she’s always standing in the same way in those medieval pictures—they both are, actually. They’re just standing incredibly relaxed with one leg slightly bent, one knee crooked, and I thought, “That’s so interesting. I’ve never stood like that in front of a mirror ever.”

DM: The fourth and final meeting where they meet outside of the room. There was a really interesting power dynamic there, because I felt like Nancy had done so much growing to the point where she had experienced all this, but even [she] knew when she overstepped a certain boundary, and Leo was coming in slightly hurt and slightly guarded. I think that’s a beautiful moment in terms of power and intimacy, because there’s true recognition, and then to see that they go flung back into one of the most celebrated parts of intimacy in the fil