Gabrielle Union Shows Off Her Sleek Style in a Prada Miniskirt 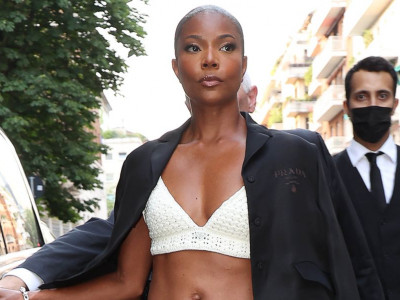 Gabrielle Union is now the latest celebrity to get in on the miniskirt trend.

This past weekend, the actress was photographed during Milan Fashion Week wearing head-to-toe Prada. The sleek outfit involved a tan belted miniskirt, a white knit bralette, and a collared black jacket worn over her shoulders. She accessorized with platform Mary Jane heels and a tiny handbag bearing a black-and-cream triangular print.

Union kicked it up a notch on the beauty side too. While she kept her glam relatively minimal with some rosy blush, a subtle wing, and highlighted eye shadow, her waist-length ponytail that ended in a voluminous puff was the real star of the show. Hairstylist Issac Poleon shared a behind-the-scenes look of the do via Instagram.

Union and her husband, Dwyane Wade, were among the star-studded guest list for Prada's spring/summer 2023 menswear fashion show on Sunday.

For the occasion, the couple looked sleek in coordinating Prada looks. Union wore a sleek tank dress with a dramatic fringe hem from the Italian fashion house, while Wade looked suave in a bright yellow knit tank and baggy black paperbag pants.

Union talked about her and Wade's relationship with fashion and each other in a 2017 interview with ELLE.

"I'm a fashion maven, but he's like a fashion warlock," she said. "If that's your relationship, you draw inspiration from your partner. There's times, and by times I mean two days ago, where I go into his closet and I wear his stuff. I took a denim robe [Visvim] and I did multiple Snapchat stories in it. He was like, 'Are you wearing my clothes?' Yes, D. Yes, I am."