Everything to Know About the 75th Annual Cannes Film Festival 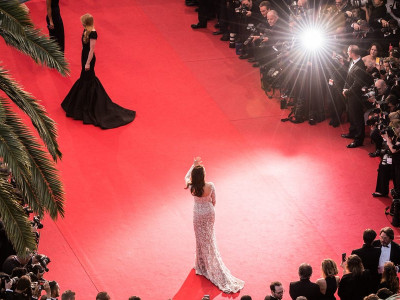 Beginning tomorrow, A-list stars will be reconvening at the French Riviera to celebrate yet another year of international cinema at the world's most star-studded film festival.

The 75th Annual Cannes Film Festival in the south of France's resort city of Cannes officially kicks off this Tuesday, May 17, 2022, and runs into Saturday, May 28, 2022. Since it was established in 1939, the festival has greatly contributed to the development of cinema, recognizing and honoring the merits of rising films with featured screenings and celebrating the beauty and art of cinema on an international scale. The festival has additionally been a gathering place for celebrities and filmmakers alike to flaunt their dazzling ensembles on the red carpet.

Following 2021's postponed and scaled down event, this year's festival will boast an even fuller list of celebrities. Ahead, see everything to look forward to at this year's glamorous event—including exclusive attendees, film honorees, and more.

As usual, those convening on the red carpet include an exclusive list of A-list celebrities, in addition to other esteemed filmmakers and figures of the film industry.

A dystopian-horror fix with a high-profile cast (notably Kristen Stewart and Virgo Mortensen), David Cronenberg's Crimes of the Future is also set to be screened at the festival. The plot centers around a performance artist (Mortensen) who undergoes a drastic synthetic mutation.

Also screening with be Hirokazu Koreeda's Broker, a drama starring Parasite's Song Kang-ho based around South Korea's baby boxes: a place where newborns have been abandoned and set for adoption. The drama hails from Japanese director Hirokazu Koreeda, who was previously awarded the festival's highest honor, the Palme d'Or, for his work on Shoplifters in 2018.

Anticipated celebrities in featured films include Stewart and Mortensen for their bone-chilling performances in Crimes of the Future, as well as Three Thousand Years of Longing co-stars Swinton and Elba. Anne Hathaway, Anthony Hopkins and Jeremy Strong will additionally be recognized for their starring roles in James Gray's historical drama, Armageddon Time.

As for the the recipient of this year's Palme d'Or Award, Oscar-winning actor Forest Whitaker is set to take home the honor. "Thirty-four years ago, attending Cannes for the first time changed my life, and assured me that I’d made the right decision to devote myself to finding connectivity in humanity through film," he said in a previous statement. "It’s always a privilege to return to this beautiful festival to both screen my own work, and to be inspired by many of the world’s greatest artists—and I feel incredibly honoured to be celebrated as part of the festival’s momentous 75th anniversary."

The festival will be available for to livestream via both its official website and app beginning on Tuesday, May 17.