Is The Staircase a True Story & Did Michael Peterson Kill Kathleen? 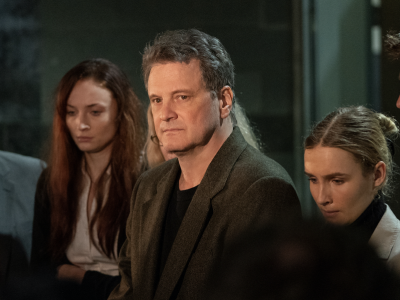 Ever since Kathleen Peterson was found at the bottom of a staircase in 2001, her mysterious death has been the subject of much media attention. In 2018, Academy Award-winning French filmmaker Jean-Xavier de Lestrade released The Staircase, a 13-episode Netflix documentary investigating the real causes of Peterson's passing. Now, HBO Max has turned the story into a scripted drama, also called The Staircase and starring Toni Colette as Kathleen Peterson. Colin Firth plays her husband, Michael Peterson, the man who was accused of her murder.

Lestrade's access to Michael Peterson means the HBO Max adaptation has a wealth of source material to draw upon. The documentary director told Metro that he began filming Peterson in February 2002 and didn't wrap until 2018. But what's the real story behind The Staircase?

Here's what you need to know about Kathleen Peterson's death, Michael Peterson's trial, and what's happened in the two decades since the case first hit the news.

Toni Collette's emotional portrayal is bound to create even more interest in the real Kathleen Peterson. Born Kathleen Hunt on February 21, 1953, she graduated first in her class from J.P. McCaskey High School and—reports Indy Week—"became the first female student accepted into Duke’s engineering school." A successful career as an executive at the communications firm Nortel followed.

It was in 1986 that Kathleen first met novelist Michael Peterson. According to Esquire, the couple moved in together three years later. Kathleen married Michael in 1997, and the couple proceeded to merge their two families.

Kathleen has one biological daughter, Caitlin Atwater, from her first marriage. Meanwhile, Michael has two sons—Todd and Clayton Peterson—from his first marriage. Michael also adopted Margaret and Martha Ratliff, the daughters of his late friend, Elizabeth Ratliff, whose death would later come to play a part in his trial.

By all accounts, Michael and Kathleen were believed to have a happy marriage and blended family. As one of their friends told CBS News in 2003, "They had all the appearances and trappings of happiness. Totally compatible with one another."

Just after 2:30 a.m. on December 9, 2001, Michael Peterson called 911 to report that he'd found his wife unconscious at the bottom of the stairs in their home, according to The News & Observer. Michael placed two 911 calls, and emergency services attended the scene soon after. During his initial 911 call, Michael said that Kathleen was still breathing, per official court documents. However, when he called back minutes later, he claimed that she was no longer breathing. Kathleen was 48 at the time of her death.

Per ABC News, Michael reported watching America's Sweethearts earlier that evening with his wife, then drinking some wine and sitting by the pool. When Kathleen went inside to bed, he reportedly stayed outside to smoke his pipe. When he finally went indoors, "he said he found his wife, crumpled and bloody and barely breathing at the bottom of the stairs," per ABC News. As viewers of both the documentary and HBO Max's adaptation will quickly learn, the crime scene looked extremely shocking.

Per ABC News, "From the beginning Peterson maintained that Kathleen had simply slipped on the stairs in a tragic accident after drinking wine and taking valium." However, NBC News reported that a medical examiner ruled that Kathleen's blood alcohol level was very low at the time of her death, so much so that she'd have been able to pass a breathalyzer test.

Members of law enforcement were reportedly suspicious of the scene at the Peterson residence in Durham, North Carolina, with NBC News reporting, "there was so much blood—everywhere—on the victim, splattered up the stairwell—that they couldn’t rule out foul play." In fact, it was reportedly the volume of blood found near the body and the lacerations on the back of Kathleen's head that made Michael an early suspect in his wife's death, via Court TV News.

Kathleen's autopsy later concluded that the manner of her death was homicide, due to "multiple blunt force impacts to [the] back of the head." As reported by CNN Law Center, medical examiner Dr. Kenneth Snell had initially marked Kathleen's death as an "accident" caused by falling down the stairs. However, as Snell told jurors, "the seven wounds he observed while watching other forensic pathologists perform the autopsy were a major reason he changed his initial finding of 'accident' to homicide from a beating."

Michael Peterson was indicted on a charge of first-degree murder on December 20, 2001, via WRAL.com. The defendant had hired criminal defense attorney David Rudolf two days prior, following extensive searches and seizures taking place at his home.

What really happened in the Peterson household in the early hours of December 9 will likely always remain a mystery. However, HBO Max's The Staircase gives viewers the opportunity to reexamine the circumstances surrounding Kathleen's death, while also delving into Michael's trial.

Jury selection began in May 2003, and the State vs. Michael Peterson trial started on July 1, 2003, via The News & Observer. While the prosecution argued that Michael most likely murdered Kathleen with a fireplace blow poke that was deemed missing from their Durham home at the time of her death, Michael's defense attorney argued that Kathleen died from a fall down the stairs.

The prosecution put forth several possible motives for Kathleen's murder. As reported by Lawrence Journal-World, "Prosecutors introduced evidence of [Michael] Peterson’s bisexuality and attempts to hire a male prostitute," suggesting that an argument could have broken out between husband and wife over the revelation.

A male escort even testified in court that he'd engaged in an email exchange with Michael mere months before Kathleen's death, with the pair planning to meet in person, via CNN. However, that meeting never transpired, and it's unclear if Kathleen knew about her husband's sexuality or not. Upon seizing Michael's computer, investigators found as many as 2000 images of naked men, along with email exchanges between Michael and a male escort, via NBC News. As noted by the publication, it was suggested that, while waiting for a work email on the night of her death, Kathleen could have discovered Michael's secret correspondence and the illicit imagery.

Another motive suggested by the prosecution hinged on the Peterson family's tenuous financial situation. While Michael was a novelist and newspaper columnist of varying success, Kathleen was an executive at communications firm Nortel, earning around $150,000 per year, via NBC News. But in spite of Kathleen's lucrative salary, the Peterson family had reportedly gotten itself into dire straits, with the matriarch fearing redundancy at her workplace.

Per Lawrence Journal-World, the Petersons had accrued "credit card debt of $143,000" at the time of Kathleen's death. And as CNN reported, Kathleen apparently had a $1.8 million life insurance policy, and prosecutors argued that Michael might have killed his wife for financial gain.

Another important element of Michael's case focused on blood spatter found at the scene. Forensic expert Dr. Henry Lee testified that the blood found at the scene was indicative of a fall. However, SBI expert Duane Deaver claimed "based on the blood spatter on her husband's shorts and shoes, the wearer was standing directly over Kathleen Peterson when she was killed," via The News & Observer. Deaver further made a convincing argument that the missing blow poke could have been a possible murder weapon. (The infamous blow poke was mysteriously found in the Peterson's garage during the trial, without any evidence of blood on it).

But perhaps the most shocking element of the trial revolved around the mother of Michael Peterson's two adopted children.

Before Michael met Kathleen in 1986, he was living in Germany with his first wife, Patricia Sue, and their two sons. The Petersons were close friends with Elizabeth Ratliff, who had two young daughters, Martha and Margaret.

In November 1985, Ratliff was found dead at the bottom of the staircase in her home. According to WRAL.com, the initial report suggested that she'd "died of a stroke," but that she was also found to have "several deep cuts to her scalp."

Once the strange coincidence of the unusual death was discovered, Elizabeth's body was exhumed as part of Michael's trial, and an autopsy concluded that she had died as the result of a "homicidal assault," and not a stroke, per The News & Observer. Per the publication, some reports have suggested that Michael Peterson was the last person to see Elizabeth alive, but Michael's lawyer pointed out inconsistencies with this theory. Regardless of the truth, the similarities between Kathleen and Ratliff's deaths didn't help Michael's case.

On October 10, 2003, Michael Peterson was sentenced to life without parole for Kathleen's murder, via The New York Times. Soon after entering prison, Michael was injured in a fight, something HBO Max's adaptation explores in depth.

While Ratliff's daughters stood by their adopted father throughout his trial and imprisonment, Kathleen's daughter, Caitlin Atwater sided with the prosecution. As well as being awarded her mother's life insurance payout, Atwater won a $25 million wrongful death suit against Michael Peterson.

In December 2011, after spending eight years in prison for Kathleen's murder, Michael was granted a new trial. As reported by CNN, a judge ruled that the jury had been misled by former SBI agent Duane Deaver's bloodstain evidence; De