You Can Now Buy a Color via NFT. What Does This Mean for Art? 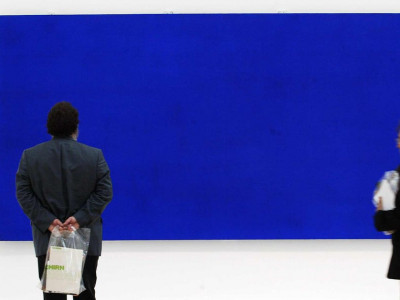 The year is 2022 and everything is for sale online, even colors. With Bitcoin, a type of web-based currency, you can buy NFTs, or non-fungible tokens, of apes, avatars, or even the long-lost Semper Augustus tulip, a flower so coveted in the 17th century it once sold for as much as a house before its value crashed back down to earth. Each one is comprised of a long string of supposedly unique code called a token; you can keep it, or you can sell it to someone else, ideally for more money than you paid, but often it goes for much less. In exchange for your money, you will get no bulbs, no monkeys, and no pigments--only the string of code and the speculation around its worth. (That’s what makes the Dutch red-and-white “broken” tulip picture a rather good, if niche, joke about the perils of puffed-up markets.) And now, you can even buy your favorite shade of blue from a marketplace called the Color Museum.

Although I’m tempted to dismiss these tokens as fake and immaterial, to write off the Color Museum as a non-place selling non-things, they exist as much as this article exists. I’m writing it to be published online (where it will exist as a string of symbols), and I will receive money for it (which I can use to buy my grocery store tulips). These exchanges are real, and although they start off immaterial, they can be used to buy physical objects. And the colors you buy with your crypto currency? They’re real too.

A trickier question to answer is whether these color squares or sullen primates should be considered art. Even trickier: If they are art, what does that mean for art making as a practice? For humanity as a whole? According to NFT (non-fungible token) believers, these tokens—and the digital locations where they are traded—offer a chance to expand the boundaries of contemporary economics, art, and culture. Yet, the emphasis is always on the first of those three symbol-rich categories. It’s not a secret: NFTs are important because they are expensive. Like many things, they exist primarily to generate money.

“We’re going to be turning colors into money,” Color Museum founder Omar Farooq explained to journalist Maxwell Strachan of Motherboard. Farooq admitted that he “can’t draw like these artists that are out there,” but as a longtime Bitcoin believer, he did have the tools to form a blockchain collective and create a platform for buying and selling digital images. The idea behind the Color Museum is that individual users will buy colors, and when artists sell digital works that use their colors, the user will be able to collect a percentage of the sale, thus making royalties off hexcodes.

In an email, Farooq describes his project as “both an experiment in shared capitalism and collaborative art.” The term shared capitalism is usually reserved for worker-owned companies (like Johnny’s Selected Seeds or King Arthur Baking), but recently crypto advocates have been using the language of labor struggles to describe their business ventures too. Without knowing more about the ownership or the art-making practices, it’s hard to say whether the Color Museum is a form of shared capitalism or collaborative art. Nevertheless, Farooq goes on to add that this museum is “in the business of art, and our art is our business.” He also quotes one of the members of the community: “Concept of owning a color is something new. … This project somehow defends itself in terms of contemporary art pretty well.”

It’s easy to debunk the claim that owning a color is a fresh idea. Although the brand didn’t receive a trademark until the 1990s, Tiffany & Co. has been claiming ownership of that bright turquoise hue since the 1840s. The year 1985 saw the first officially trademarked color—a nasty intestinal pink—get awarded to Owens Corning fiberglass insulation, and since then, a number of companies have claimed their own colors-in-context, including UPS, T-Mobile, and John Deere. Pigments can be patented too. Yves Klein Blue and Vantablack are both trademarked substances, each with a distinct chemical makeup.

However, I actually agree with the second part of that community member’s statement. The Color Museum is a perfectly sensible project if you place it alongside other works of contemporary art, like Tim Steiner’s “human canvas” or Richard Prince’s printed Instagrams. By that, I mean it makes logical sense to buy and sell colors. We buy and sell everything else. There is no sacred space that can’t be penetrated by capitalism, no experience too precious to be monetized.

Once, back during a time when royalties were for kings, all art was an “art object.” Art was by definition material, physical. Sometimes art was made to be bought and sold, but sometimes it was made for other reasons. We believe early people carved stones and painted cave walls to honor their deities, but it’s also likely that some early makers did it simply for the joy of expression. In her newsletter, Notes of an Aesthete, Alice Gribbin gracefully argues in favor of art for art's sake, a concept she calls “every bit as old as the first artworks.” She writes, “A simple desire courses through the blood of our species: to make, to make things other than tools, and not just because particular problems need to be solved but because it is in our nature to make.” Though it’s become fashionable to view art as an instructional tool, a shortcut to empathy, or a therapeutic measure, Gribbin strips us back to basics. Art can do all those things; it can teach, express, soothe, connect. But just as often, art exists because someone made it. Someone wanted to carve that bone, paint that wall, weave that tapestry. A human wanted to see what type of creation they could bring forth, and they did.

For so long, art resided in the world of things. Each work of art was unique and authentic. This is still true to some extent; there may be many round-bodied fertility sculptures, but there’s only one Venus of Willendorf. But thanks to books, magazines, cameras, printers, computers, and handheld screens, the physical presence of a work is no longer a requirement for viewership. We can all experience art from a distance, yet people still want to go to museums and temples and galleries because there is something special that happens when you bring your body close to the object. Proximity matters, our senses matter.

In 1936, theorist Walter Benjamin coined the term aura to describe the special quality of a work of art in both space and time, arguing that a work's aura is dependent not just on its physical qualities, but on its authenticity. You want to see the Venus of Willendorf, not a reproduction of it, because you know that object has been given a sort of psychic weight by the millions of eyes that have previously rested on it. An aura is a form of power that centers on uniqueness (or one-timeness) and accumulated attention. The aura is what makes you feel like the art is looking back at you—like it’s a little alive, a little aware. NFTs are speaking to this same desire for a singular experience, but doing it in a new way. Instead of stressing the importance of being physically with a work of art, as Benjamin did, NFTs focus on the ability to own an authentic piece of the symbolic order.

“Authenticity is now a quality of the NFT that represents the original, and the only authenticity available today is statistical uniqueness,” Julia Friedman and David Hawkes write for the Athenaeum Review. “The cries of fear and loathing at the prospect of destroying a Basquiat drawing … or a Banksy print … are not naïve defenses of the artwork’s lost integrity. They are inarticulate but nonetheless passionate protests against the postmodern condition.”

In another piece, these same writers go on to argue that the “confusion and scorn” many feel about NFTs is “no mere backwoods Luddism.” As a somewhat inarticulate backwoods Luddite, I have to say that I agree. People recoil from NFTs because they reject the idea that color can be bought and sold (though in this context, it can), and they protest against the invasion of tech into every sphere of their lives (even though it can be very helpful at times), and they feel, logically or not, that something is very wrong with where the digital world is leading us. In the words of L.M. Sacasas, we’re living in a “human-built world [that] is not built for humans,” and we don’t like it.

It’s not just that late-stage capitalism has succeeded in monetizing so much of our existence, though that’s a huge part of the problem. It’s also that we are still bodies, still people who need the things people need: food, water, shelter, love, beauty. We haven’t uploaded ourselves into the singularity or the matrix, or whatever. That’s not an option. We can still die from lack of basic goods. We still have needs that can’t be met in cyberspace or the metaverse. I think more of these needs are physical than we like to admit. Food, obviously, can’t be replaced with digital food. But I think it’s proving harder to replace in-person communication and in-person aesthetic experiences than the tech world expected. It’s not just that the tech isn’t good enough to transmit smells or tastes, it’s also that the auras are gone.

One morning, on the way back from dropping off my daughter at day care, I stopped short in the middle of the icy winter road and my car skidded. I didn’t hit the deer. As a result of this almost-maiming, I sat for a moment in a heightened state of adrenaline and watched the rest of the herd cross from one side of the dead-end road to the other. The larger deer took their time, walking warily across as though they were aware I could suddenly charge forward in my dented Subaru and end their lives. The last deer was the smallest, and she (I assume) bounded quickly. It was the most ordinary thing, to see a small herd moving across a winter landscape, but I think the herds of grazing animals painted on the caves of Lascaux were probably pretty ordinary too. Animals with curved