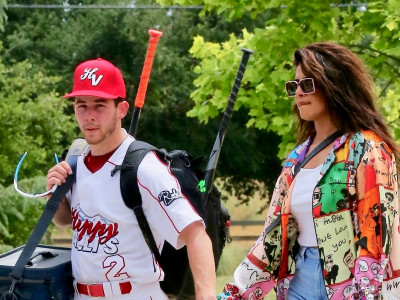 New parents Nick Jonas and Priyanka Chopra enjoyed a fun day out with their family this weekend.

The pair reunited with Joe Jonas and Sophie Turner—who are expecting their second child together—at a softball game in Los Angeles Sunday, where Nick played with his team, the Happy Valli's.

The Quantico actress was spotted giving her husband a kiss and hug on the sidelines before he entered the field in his white uniform, red cap, and ball glove.

Priyanka wore a colorful graphic button-down over a white top, denim shorts, and white sneakers, and sported oversized sunglasses with pink frames. She cheered Nick on with Joe and Sophie.

Joe looked casual in a gray T-shirt, brown pants, and gray-tinted square sunglasses. Sophie, meanwhile, wore a lime green top-and-pants set, which showed off her growing baby bump. She accessorized with yellow-tinted sunglasses and a gray bag, and was seen carrying a stuffed animal, presumably for her daughter, Willa.

Nick and Priyanka—who married in 2018—welcomed daughter Malti Marie Chopra Jonas this past January via surrogate. In an Instagram post for Mother's Day, the two said they were "overjoyed" that after more than 100 days in the NICU, their baby girl was finally home with them.

"Every family's journey is unique and requires a certain level of faith, and while ours was a challenging few months, what becomes abundantly clear, in retrospect, is how precious and perfect every moment is," Priyanka wrote in the post.