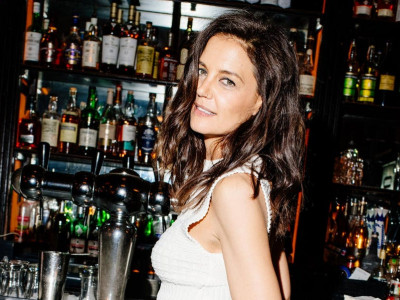 Katie Holmes' latest fashion choice is cozy in the front, party in the back.

The Coda actress stepped out Thursday night for a dinner at Balthazar, celebrating the grand opening of Mango's flagship store on NYC's Fifth Avenue. For the event, the star wore a head-to-toe look by the Spanish brand, showing her favored minimalist style with a fun twist.

In pics from the event, the Dawson's Creek alum wears a sleeveless white knit crop top, featuring a sexy backless cutout, with high-waisted wide-legged trousers and black platform slides, all by Mango. She also wore her hair styled in loose waves with light makeup, and dainty jewelry including several stud earrings and a small nose ring.

The Batman Begins actor, who has been a recent fan of the brand, joined celebs including Tommy Dorfman and Annabelle Wallis to mark the opening of the three-floor store, which features a new Mediterranean-style design concept evoking Mango's home base, Barcelona.

Thursday night's appearance comes days after Holmes spent a romantic day in NYC with her boyfriend Bobby Wooten III. The actress and the musician were seen riding Citi Bikes and grabbing lunch last Sunday, while engaging in some light PDA and holding hands during the meal. At one point, the couple was spotted kissing and embracing in the middle of the sidewalk, with Holmes sweetly wrapping her arms around Wooten.

A source close to Holmes recently told E! News that the duo met through friends, and that they're excited to see where things go with their relationship.

"They know some of the same people who connected them and so far, it's working well," the source told the outlet. "Katie is excited about seeing someone and is very happy. It's new, but it's going well. She enjoys having someone in her life and he is very kind and good to her."