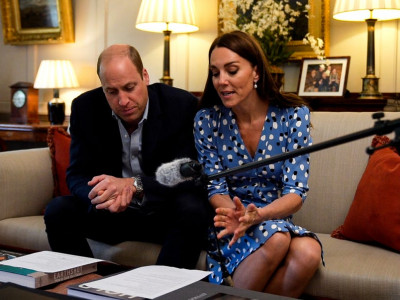 Prince William and Duchess Kate took over every radio station in the United Kingdom today to deliver an important message.

At 10:59 a.m., the Cambridges began their Mental Health Minute. During their surprise 60-second broadcast, they spoke about loneliness and mental health.

William continued, "And we can all feel lonely sometimes."

The royals, who appeared to record the message from their Kensington Palace home, encouraged listeners to be there for those who are feeling isolated.

"So if you think someone you know may be feeling lonely, just give them a ring, send them a text, or knock on their door," Kate said.

"Maybe suggest meeting for a cup of tea or a walk," William added.

"Because these small acts of kindness can make a big difference and help us all feel less lonely," Kate noted.

While the COVID-19 pandemic has certainly brought about many physical and emotional struggles for people across the world, William said it has also "reminded us of the importance of human relationships."

The future King of England also apologized to listeners for "interrupting every radio station in the country."

"But if we interrupt the lives of those who are feeling alone … " Kate said.

" … We can help lift them out of loneliness," William finished.

During his and Kate's trip to Scotland this week, William visited Edinburgh's Heart of Midlothian Football Club to witness The Changing Room, a program run by Scottish Association for Mental Health (SAMH) that uses football as an opportunity for men to tackle their emotional well-being.

William's brother, Prince Harry, has also been an avid supporter of the cause. In the documentary The Me You Can't See, Harry said that part of the reason he left the royal family was because the lifestyle was affecting his wife Duchess Meghan's mental health—to the point where she wanted to end her life—and after living through that with his mother, Princess Diana, he couldn't bear to see another woman he loves suffer from a condition that can be treated.

And last October, in honor of World Mental Health Day, they shared an Instagram message stressing the importance of mental wellness and highlighted various organizations—including one of Kate's main charities, the Anna Freud Centre—supporting those who are struggling.

"Taking care of our mental health and wellbeing has never been more important. This #WorldMentalHealthDay we are highlighting some of the fantastic organisations providing support for those who might need it - because there is help out there," they wrote. "What will you be doing to take care of your mental health today?"

A post shared by Duke and Duchess of Cambridge (@dukeandduchessofcambridge)