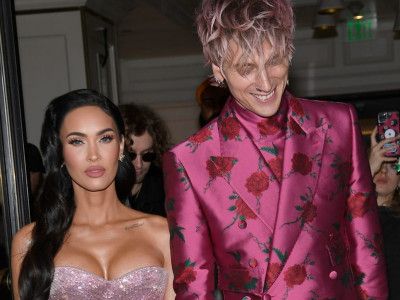 Since getting together, Megan Fox and Machine Gun Kelly have been known for coordinating some "edgy" couple looks together. But now, the two are proving that they know how to make a classic statement on the red carpet, sans all-black outfits.

Yesterday in Los Angeles, Fox and MGK attended the world premiere of their new movie, Good Mourning. The actress dazzled in a glittering dusty pink gown that was custom-made by Philosophy di Lorenzo Serafini. The strapless dress featured a sweetheart neckline and a thigh-high leg slit. Fox also wore a pair of nude platform pumps with clear straps from Andrea Wazen, plus a pair of studded earrings.

Meanwhile, the rapper, whose born name is Colson Baker, looked suave in his own iteration of an all-pink outfit. Baker wore an entirely hot pink suit that was printed all over with a red rose pattern. He accessorized with silver earrings and black-and-white loafers.

Baker plays London Ransom, a movie star whose life takes a turn for the worse after he gets dumped on the same day of the most important meeting of his career, per Variety. "Compounded by chaotic roommates and wildly unpredictable twists and turns, London’s day keeps going downhill until ultimately, he is forced to choose between pursuing his one true love and landing a life-changing, starring role in a major motion picture," the film's plot description reads.