Chlöe Takes Her Place Among the Hip-Hop Feminists 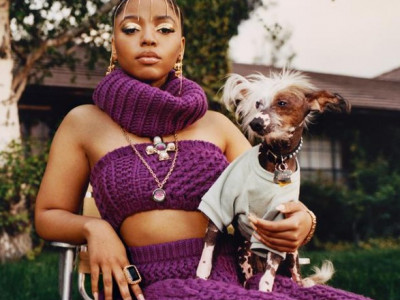 On the day of our interview, Chlöe is late and sending apologies from the set of a very hush-hush series Donald Glover is directing for Amazon. Chlöe, who costars alongside Dominique Fishback and Damson Idris, is still waiting to wrap and production is running behind. The truth is, it can’t be helped. When you’re a 23-year-old multihyphenate (actor-dancer-singer-songwriter-producer) phenom who’s moving with heat, schedules are good intentions at best. And Chlöe is hot. Her fourth and final season as Jazz Forster, the track star with a sweetly barbed tongue on Grown-ish, has come to an end, but that doesn’t mean we won’t be seeing more of Chlöe. In addition to the Glover project, she has at least three other screen roles on deck, including in Praise This, a movie about youth choirs, which is currently shooting in her hometown of Atlanta. (Fun fact: Her sister, Halle, is also in the ATL, shooting an adaptation of The Color Purple.)