Travis Barker Says He Moved to Calabasas for Kourtney Kardashian 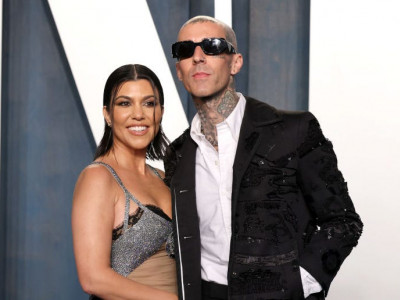 Travis Barker was in love with Kourtney Kardashian long before they started dating, and in a big reveal, he admitted he moved to Calabasas, California, years ago to be close to her.

The Blink-182 drummer apparently told Kris Jenner that he bought his house a block away from the Poosh founder because he knew she was the one for him.

Jenner told Kardashian about the conversation on Episode 5 of The Kardashians.

"Do you want to know the real reason why he moved to Calabasas?" Jenner asked her eldest daughter. "He said, 'Because I knew she lived in Calabasas, and I knew she was the love of my life, and I didn't even know her like that, but I just knew if I couldn't date her or be with her because she was with someone else that at least I could live by her."

Kardashian paused upon hearing her fiancé's words to her mom and later said of Barker, "I've never met a better human in my life, like, the thoughtfulness and just everything."

Barker reportedly bought his first home in Calabasas 15 years ago, in 2007—one year after his split from wife Shanna Moakler—and a second home in the area in 2017.

Though he and Kardashian have been friends for many years, the two began dating only last year. Now, they are engaged, and the mom of three said they're considering moving into a home together.

On another episode of The Kardashians, Kardashian said, "Travis and I currently live in separate homes a block away from each other." She added that they are going to "explore the idea of living in one home." The two were seen looking at a house together in Bel-Air and making out all over the furniture.