Goop Pranked Us All for a Good Cause 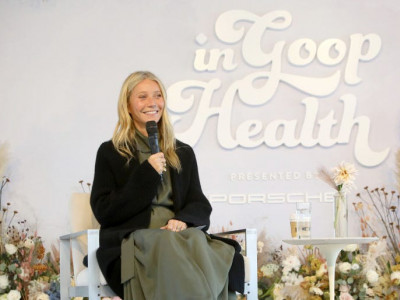 Many were skeptical, to say the least, when yesterday Gwyneth Paltrow's Goop announced it was planning to sell a high-end disposable baby diaper, called "The Diapér."

The wellness brand, known for its quirky luxury products, boasted that the diaper would be "lined with virgin alpaca wool and fastened with amber gemstones, known for their ancient emotional-cleansing properties. Infused with a scent of jasmine and bergamot for a revitalized baby."

Social media quickly erupted in commentary over the outlandish Diapér.

"Is there a diamond fastener option??" one user wrote.

"For Buckingham Palace I suppose," another commented.

"This can't be real. There is a formula shortage but your baby can have designer diapers," another wrote.

Hours after its initial post, Goop thankfully revealed that it was all just a big PR stunt.

"Goop launched a luxury disposable diaper at $120 for a pack of 12, and there was a lot of outrage. Good," Paltrow said in a video posted on Goop's Instagram page. "It was designed to piss us off. Because if treating diapers like a luxury makes you mad, so should taxing them like a luxury. The Diapér is a fake product meant to shine a light on a real problem."

Paltrow explained that the prank was meant to bring awareness to the high cost of diapers and to raise money for Baby2Baby, a nonprofit that provides diapers, clothes, and other necessities for U.S. children in need.

"Despite the absolute necessity of diapers, in 33 states, they aren't treated as an essential item," Goop wrote on its website. "They're taxed as a luxury good. Depending on the state, this sales tax can add between 1.5 percent and 7 percent to their cost. (We priced our fictional Diapérs at $120, because that is what the diaper tax could cost families annually.)"

On Mother's Day, Paltrow appeared on CBS to talk about the diaper tax and even wrote an opinion piece addressing the issue.

Acknowledging her own privilege and stressing how difficult it is for women to keep up with the costs of motherhood, Paltrow wrote, "I never had to think about the cost of diapers, never once, until recently when my team at Goop brought it up. We were talking about the diaper tax."

While some argued that Goop's Diapér prank was "too on-the-nose to be read as satire," Paltrow's video reveal brought on mostly positive reactions, with people praising her efforts to highlight an important issue.