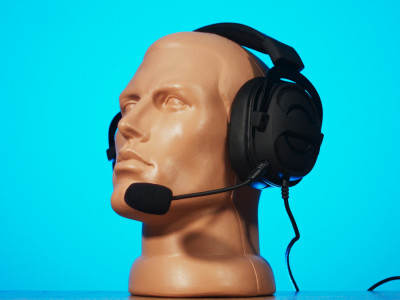 Regarding gaming headsets worth more than $30, but less than the conventional $150, I have some simple requests. They are not difficult to implement, but they are important and my recommendations depend on them. Therefore, I immediately say – I recommend GamePro HS1240 and GamePro HS1630.

As you already understood, the price places to both headsets among mid-budget models. $33 and $39, but this is with discounts, and when they pass, just add $5 on top.

Now about my requests. Let’s start with the fact that the gaming headset should sound in the game at least indirectly, but with excellent three-dimensionality. That is, so that you understand where you are being shot from, so that you can orient yourself in space exclusively by audio.

Both headsets have this – and in terms of sound quality, they are approximately the same. Despite the fact that in the senior 1630 model the drivers are not 50 mm, but 53 mm. In fact, if the bass is better, but it is not critical.

Next – noise isolation, or passive noise reduction, as the Chinese love to call it. Both headsets, despite the fact that they do not have a mechanism for turning inward, are quite flexible, so they are directed perfectly behind the ear and due to elasticity, they cover the entire ear with ear pads.

Therefore, the noise reduction is not bad. Actually, the noise from a pair of fans of the ASUS ROG Zephyrus S15 laptop with Core i7 and RTX 2080 was not removed at all, but was made much muffled and pleasant, like rain outside the window.

This, however, leads to the fact that the isolation protects not only from noise, but also from air, so the ears in the skin-tight ear pads get sweaty. Not so much in the junior version, because it has ventilation holes in the ear pads, which the senior one does not have.

Next – microphones. Absolutely adequate and clear in both models. Actually, they are almost the same, interchangeable, and in terms of physical characteristics, you can’t find fault with them. They are flexible enough, but also keep their shape, so you can take them away from your mouth without any problems.

And here I am at a crossroads. Because on the one hand – the GamePro HS1240 looks as if the HyperX headset has been completely stripped of any identifying marks and came out half-naked, but very, very pretty.

And the GamePro HS1630 model has beautiful material, which I boldly call the strongest soft-touch that I have ever touched. It’s plastic without a rubber coating, but plastic with a texture as rough as possible. And that’s cool.

In all other respects, both sets are twins. The package is the same, in the boxes there is a splitter for the microphone and speakers, as well as Velcro and a replacement microphone.

The headset cables are long, two meters each, the mass is the same – 290 g. The characteristics are almost similar, the difference is the impedance, 16 vs. 64 Ohms, and the sensitivity is 110 vs. 115 dB in the junior and senior versions, respectively.

And the sound quality – it is very difficult for me to distinguish one headset from another. They are both bass players, with a rather noisy, but very stable working three-dimensional stage. In both of them, with my eyes closed, I could easily hear the sound or understand where the tank was firing at me from. And this, in fact, is the only thing that was and is needed from these headsets.

I cannot give a clear answer, which of the models I recommend to you 100%, because both have their tangible advantages and are balanced in general.

And besides the objective balance between specifications and price, there is simply a matter of taste. Which case do you like better? However, I recommend both GamePro HS1240 and GamePro HS1630 and not without pleasure!

You can also help Ukraine fight with Russian occupants via Savelife or via an official page of the National Bank of Ukraine.