Australian Open: Novak Djokovic spurred on by past events after reaching semi-finals in Melbourne 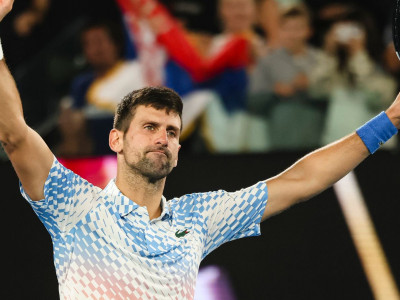 Novak Djokovic admitted his travails in Australia are giving him extra fuel as he chases a 10th title at Melbourne Park.

The Serbian was again in superb form, painting the lines consistently in a 6-1 6-2 6-4 victory over fifth seed Andrey Rublev on Rod Laver Arena to set up a semi-final with unseeded American Tommy Paul.

Djokovic, who has never lost at the Australian Open once he has reached the last four, is trying to make up for lost time after last year's vaccination furore and deportation, while this year he has been battling a left hamstring problem.

"I don't think that I lack determination," said Djokovic, who tied the record of former coach Andre Agassi with a 26th consecutive victory in Melbourne.

"I always try to give my best, particularly in Grand Slams, because at this stage of my career those are the tournaments that count the most, of course.

"But you could say that there is something extra this year, yeah. You could say because [of] the injury, what happened last year, I just wanted to really do well.

"So far, I have a perfect score in Australian hard courts, in Adelaide and here. I've been playing better and better. I couldn't ask for a better situation to be in at the moment."

The fifth seed at times did again appear bothered by his hamstring but it did not affect his ability to hare around the court, repelling everything big-hitting Russian Rublev threw at him.

He was more affected by a heckler who called out "Come on Andrey, send him home" during the first set, drawing loud boos from the largely pro-Djokovic crowd and prompting the Serbian to complain to British umpire James Keothavong.

"If somebody steps over the line and starts making comments that are not related to support of the other player, he just wants to provoke and insult, then stepping over the line is something that I react to. Maybe not first time, second time, but after that, yes, then I ask the chair umpire to react.

"After that, I heard him, but he was supporting Rublev. He was not making any bad comments until the end of the match, so I didn't have any complaints."

It was Rublev's turn to appeal to Keothavong in the second set when he felt Djokovic should have received a time violation but the Russian, bidding to reach his first Slam semi-final at the seventh attempt, was mostly frustrated by the man down the other end of the court.

Earlier, Paul got the better of fellow American Ben Shelton to reach his first Grand Slam semi-final. The run of 20-year-old Shelton, in just his second grand slam and on his first trip outside the USA, has been one of the stories of the tournament but Paul used his greater experience to secure a 7-6 (6) 6-3 5-7 6-4 victory.

Paul, who will break into the top 20 for the first time after the tournament, becomes the first American man to reach the semi-finals here since Andy Roddick in 2009.

The American was cheered on by his mother, who hopped on a plane after his fourth-round win and arrived in Melbourne on Wednesday morning.

"It was awesome," Paul said. "I was actually, when I first heard, pretty nervous because we've had a good thing going here and I didn't really want to change anything.

"After a little bit of thinking, I was like, 'Yeah, I'm in the quarter-finals of a Slam'. She's sacrificed a ton to get me here.

"She deserves to be here and deserves to see me win big matches'. I was really excited to see her and have her here."