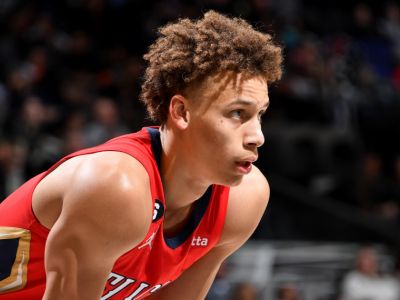 New Orleans is already without Zion Williamson (hamstring) and Brandon Ingram (toe), with the Aussie rookie potentially set to join them on the sidelines.

Prior to tonight's game, Daniels had started the Pelicans' last six games at point guard.

What's next for Daniels and the Pelicans? Here is what we know about his injury and what it means moving forward.

Early in the second quarter, Daniels went down grabbing his right ankle as he attempted a floater, awkwardly landing on Nuggets big man Zeke Naji's foot.

He exited the game and was ruled out for the remainder of the contest shortly after.

Daniels was seen leaving the Smoothie King Center in a walking boot with crutches.

It's unclear how long Daniels will be sidelined, with more updates to come postgame.

Dyson Daniels was helped to the locker room after turning his ankle coming down on Zeke Nnaji's foot.Prayers up for Dyson 🙏pic.twitter.com/wHXA323XPz— ClutchPoints (@ClutchPointsApp)

Here are the next five games on New Orleans' schedule.