Why is Son Heung-min wearing a mask at the World Cup? 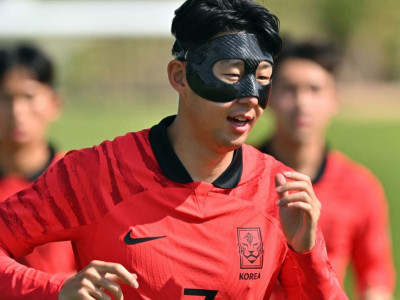 South Korea face a real challenge at the 2022 World Cup after being drawn in Group H alongside Uruguay, Ghana and Portugal.

Paulo Bento's side eased through AFC qualifying to reach Qatar and they are competing in their 11th World Cup finals.

The passionate South Korean fans will be hoping to secure a first knockout place since 2010 with their star man Son Heung-min passed fit to join up with the squad.

The Tottenham Hotspur forward was a possible fitness doubt after undergoing surgery on a facial injury, but the 30-year-old declared himself fit to travel and starts in their opener against Uruguay. However, he must take extra precautions while playing at the finals.

MORE: World Cup injuries 2022 tracker: Stars who could miss out in Qatar as Benzema leaves training

Son was forced off in the opening stages of Spurs' 2-1 Champions League win away at Marseille on November 1 following a collision with an opponent.

Tests confirmed multiple fractures to his eye socket, with the Premier League side swiftly sending him for surgery, as his World Cup chances were placed in doubt.

However, Son's recovery has been positive, even though he missed Spurs' final three matches before the World Cup break and South Korea's friendly win over Iceland on November 11.

After confirming he would battle through the pain to captain his country in Qatar as his recovery continues, Son also said he would wear a protective mask to cover the area in training and matches and fans will notice him wearing the protective gear when lining up against Uruguay.

MORE: Leagues with most players at World Cup 2022: Premier League stars in Qatar

Son is the leading light in Bento's squad, netting seven goals during qualifying. He is also his country's highest-profile player at club level.

The 2022 World Cup could be a record-breaking tournament for Son as he is certain to move into the top 10 for all-time appearances. With 104 caps to his name, he will move level with Park Sung-hwa in ninth place in the all-time list if he appears in all three of his side's group games in Qatar.

Son is still some way short in the international goals race, though. His tally of 35 puts him fourth on the list, one behind Park Lee-chun. Cha Bum-kun leads the way on 58.

Happy birthday Cha Bumkun! 🇰🇷 🎂He was a player at 1986 #WorldCup & a coach in 1998https://t.co/3MW0n9KnNT pic.twitter.com/bjIGzOESyB— FIFA World Cup (@FIFAWorldCup)

Son's first taste of competitive international football came in the 2011 AFC Asian Cup where he broke new ground as the competition's youngest ever scorer.

His build-up for the 2014 World Cup was famously interrupted by his father, who called for him to be rested due to injury issues, before he returned to the fold ahead of the competition.

After making his World Cup debut in the 1-1 group-stage draw with Russia, Son netted his first World Cup goal in South Korea's 4-2 loss against Algeria, as they failed to reach the last 16.

At Russia 2018, South Korea again failed to make the knockout phase after losing their first two games against Sweden and Mexico, despite Son' late consolation goal against the latter.

There was a moment to savour in their final Group F game, though: Son's 96th-minute goal secured a 2-0 win over Germany and dumped the holders out of the competition.

On this day in 2018, Germany’s World Cup defence was ended by Korea and Son Heung-min 😮(via @FIFAWorldCup)pic.twitter.com/FfC3hWZP7I— B/R Football (@brfootball)

Despite his tally of three World Cup goals, Son's numbers for Spurs have boosted his chances of clinching a surprise Golden Boot in Qatar, if he can stay fit.

He scored 23 Premier League goals last season to share the Golden Boot alongside Liverpool star Mohamed Salah, and he has five club goals already in 2022/23.

However, based on South Korea's difficult group, Son's Golden Boot chances are rated at 100/1 by most UK bookmakers.

The favourites to win the award in Qatar are listed below,Odds as of November 1, 2022.