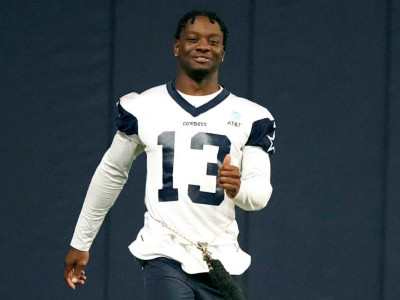 EAST RUTHERFORD, N.J. -- Michael Gallup's return to the Dallas Cowboys' lineup will have to wait one more week. Gallup will be inactive for Monday's game vs. the New York Giants, according to sources, despite a full week of practice as he returns from a torn ACL in his left knee suffered last January. Gallup was listed as questionable and has gone through two full-padded practices the past two weeks. The Cowboys opted not to keep Gallup on the physically unable to perform list to start the season, which would have kept him out of the first four games and not allowed him to practice. The Cowboys play the Washington Commanders on Sunday at AT&T Stadium. Gallup might not be the only offensive weapon the Cowboys will be without. Tight end Dalton Schultz, who is also listed as questionable, will test his injured right knee in early warm-ups to see if he can play. He has played in 61 straight games. If Schultz does not play, then rookies Jake Ferguson and Peyton Hendershot will split the tight end duties. The Cowboys also plan to call up tight end Sean McKeon from the practice squad. Without Gallup, the Cowboys will activate Jalen Tolbert, their third-round pick, for the first time this season to go along with CeeDee Lamb, Noah Brown, Simi Fehoko and KaVontae Turpin. Leading into the Giants game, Mike McCarthy said Gallup has looked good in practice, but the Cowboys want to be careful with his return in order for him to be effective for a large portion of the season Veteran offensive lineman Jason Peters, 40, will be signed to the 53-man roster and be active Monday. Signed a few days before the season started after Tyron Smith suffered a torn hamstring, the Cowboys have increased Peters' practice workload, but he is expected to play left guard and potentially split work with Matt Farniok. The Cowboys have been pleased with the work of their first-round pick Tyler Smith at left tackle through two games. Peters played left tackle for most of his career, but did play right guard for a spell while with the Philadelphia Eagles.
Read full news…
More news