Tyson Fury says Anthony Joshua fight is off: 'It's officially over!' 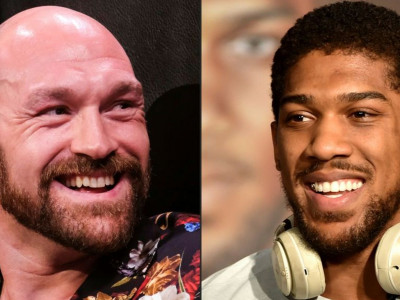 Tyson Fury has declared he will not be fighting Anthony Joshua because "no contract has been signed" after his self-imposed 5pm deadline on Monday. Joshua said on Sunday he will sign the contract to fight Fury after the WBC champion issued an ultimatum if they are to put together their all-British heavyweight battle this year. Fury, who initially called for Joshua to sign the contract by Monday, returned to Instagram to state that Joshua had until 5pm otherwise he will walk away from the deal. But Fury later went on Instagram to say: "It's official. D Day has come and gone. It's gone past 5pm Monday, no contract has been signed. It's officially over for Joshua. He's now out in the cold with the wolfpack. Forget about it. Idiot. Coward!" He goes on to say: "I always knew you didn't have the minerals to fight the Gypsy King. Good luck with your career, and your life." More to follow.... This is a breaking news story that is being updated and more details will be published shortly. Please refresh this page for the latest updates. Claressa Shields vs Savannah Marshall fight provisionally postponed to October 15 Bob Arum: Anthony Joshua's team aren't anxious to make Tyson Fury world title fight Joe Joyce and Joseph Parker weigh in at career heaviest ahead of WBO interim heavyweight title fight AJ-Usyk: Ramla Ali aims to inspire women and girls with history-making Crystal Nova clash Callum Smith sets sights on light-heavyweight glory - 'I'm a better fighter than when I was world champion' Anthony Joshua: I have the hunger to fight again in 2022 despite defeat to Oleksandr Usyk Sky Sports brings you live updates as they happen. Get breaking sports news, analysis, exclusive interviews, replays and highlights. Sky Sports is your trusted source for breaking sports news headlines and live updates. Watch live coverage of your favourite sports: Football, F1, Boxing, Cricket, Golf, Tennis, Rugby League, Rugby Union, NFL, Darts, Netball and get the latest transfers news, results, scores and more. Visit skysports.com or the Sky Sports App for all the breaking sports news headlines. You can receive push notifications from the Sky Sports app for the latest news from your favourite sports and you can also follow @SkySportsNews on Twitter to get the latest updates.
Read full news…
More news