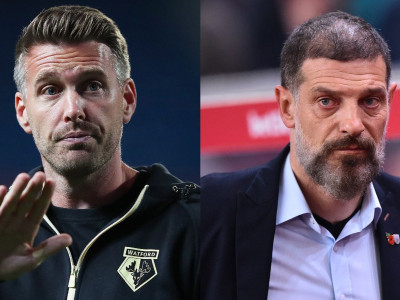 Watford have sacked manager Rob Edwards and appointed Slaven Bilic as his replacement. Bilic has signed an 18-month contract at Vicarage Road, replacing Edwards who took charge of just 11 matches during a three-month stint at Watford. In a statement, Watford owner Gino Pozzo said: "As with all decisions taken by the Board, I believe this change to be in the best interests of the club. "We felt Rob had enough time to show us the identity of his team, however performances haven't reflected our hopes and ambitions. "Now we must move forward, and, in Slaven Bilic, we have secured the services of an experienced coach who has recent experience of promotion to the Premier League." Edwards was brought in following the club's relegation from the Premier League last summer having impressed at Forest Green, whom he led to the League Two title. The 39-year-old made a promising start as Watford collected seven points from their opening three games but, after managing just one more win since, he became the 17th permanent manager to lose his job since the Pozzo family took over Watford in 2012. Transfer Centre LIVE! Championship table Get Sky Sports Download the Sky Sports App Please use Chrome browser for a more accessible video player Former Croatia international player and head coach Bilic takes over with Watford 10th in the Championship table ahead of a trip to Stoke on Sunday. The 54-year-old managed West Ham in the Premier League and his most recent work in English football saw him guide West Brom to promotion from the Championship in 2019/20. A Watford statement concluded: "Bilic's other staff will be confirmed in due course and Watford FC will make no further comment at this time." Sky Sports reporter David Prutton: "It would be foolish to say that it was a massive surprise, given the way that Watford is built, the way it progresses, and expectation from the Pozzo family. "Edwards has apparently had long enough to show his identity - 10 games in the Championship - this really is the sharp end of professional management. "What we needed was continuity behind a coach that we believe in and the supporters believe in. We also wanted somebody who could grow with us. We know that we could not carry on as we were. Watford Football Club needed its culture back. In Rob Edwards, we have appointed a manager we all totally believe in, and a manager who will lead and drive that change. We will be supporting Rob Edwards come hell or high water. We believe that he will deliver what we all want – sustained and successful Premier League football.” "If they are comparing how Burnley are doing, how Norwich are doing - the fact that you've got Reading, QPR, Sunderland, Blackburn, Rotherham and Bristol City all above Watford in the table. Possibly there is something in that. "The owners want to give the next man, Slaven Bilic, enough time to mount a promotion charge. That club is geared towards an instantaneous return to the Premier League. "The speed of the new appointment reflects the ruthless nature of football as a business. Bilic has got recent form, taking West Brom to the Premier League and that's exactly where Watford need to be. He's a very charismatic, experienced manager at the top level. Please use Chrome browser for a more accessible video player "He has a different sense of personality. Bilic has a bank of experience already there. Time is of the essence now. Slaven Bilic has been brought in, fundamentally, to get them promoted. "If he doesn't, it would be deemed inadequate. Make no mistake, this change has been made with the ultimate and only aim of getting Watford back to the Premier League." October 2: Stoke (A) - kick-off 12pm, live on Sky Sports football October 5: Swansea (H) - kick-off 7.45pm, live on Sky Sports football October 8: Blackpool (A) - kick-off 3pm October 15: Norwich (H) - kick-off 7.45pm October 19: Millwall (A) - kick-off 8pm, live on Sky Sports football Super 6 is back, bigger and better than ever with a £250,000 jackpot. Play for free.
Read full news…
More news