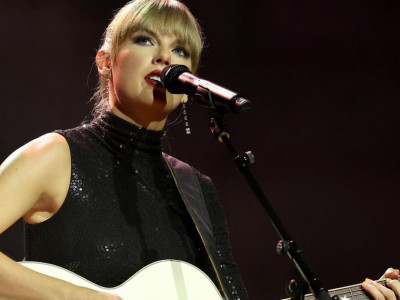 Everything the NFL does from a marketing perspective is carefully crafted and curated, designed to send a clear message. While sometimes it's misguided (ÑFL), there's always a reason behind it.

The same really goes for Taylor Swift, who has cultivated a massive brand for herself to the point she doesn't have to even make new music. She has re-recorded several of her early albums, and she now has a new album ("Midnights") dropping Oct. 21.

Now, why are NFL and Taylor Swift comparisons being drawn in these two opening paragraphs? Well, because the two MIGHT be making a big announcement together very soon.

Those logging into Twitter Friday might find themselves being absolutely rolled over by Swift fans, as the NFL announced a multi-year partnership with Apple Music for the Super Bowl at -- wait for it -- midnight last night.

Now, for those unfamiliar with Swift's fans, they're always about one degree from becoming Charlie Day looking for Pepe Silvia. But some of the stuff here lines up. For example, Swift's relationship with Coca-Cola prevented her from doing the Super Bowl halftime show when it was sponsored by Pepsi. So we're now two-for-two on things that could favor Swift doing it.

Now, Swift does have a complicated history with Apple. Back in 2015, she refused to let Apple Music stream her then-latest release "1989," which literally led to a change in how Apple worked with its artists. Relations there appear to be smoothed over at least, so it doesn't seem like a conflict of interest.

In 2020, Jennifer Lopez and Shakira shared the booking Miami as Puerto Rican and Colombian co-headliners, in 2021 The Weeknd got the nod in Tampa Bay (it's a bit of a shame the NFL didn't wait until the Super Bowl was in Las Vegas, although "After Hours" will be four years old by then), and in 2022 it was Dr. Dre, Snoop Dogg, and Kendrick Lamar representing Los Angeles with help from Mary J. Blige, Eminem, and 50 Cent (not to mention Anderson .Paak on drums).

So, if we try to divine from tea leaves, perhaps the NFL is doing an "every other year" thing and going for local flare one year and pop stardom the next. Or, more likely, it's just doing what it thinks will hit biggest.

If we MUST discern some kind of pattern from this (and yes, we must), Swift's Oct. 21 release date would align with the release dates of some of these, including Maroon 5, Lady Gaga, and Katy Perry -- three of the biggest pop acts on this list -- but it cannot be emphasized enough this is a major stretch.

Swift hasn't toured since the "Reputation Stadium Tour," an international affair in 2018. There is speculation she's preparing for a 2023 tour for her latest albums "Lover," "Folklore," and "Evermore." Perhaps this could tie into that.

There's still going to be some length of speculation, as the NFL doesn't generally announce who will be performing until later in the season. Don't expect that to dissuade from incessant speculation, however. Swift has some of the most rabid fans on the planet, and this would be a massive feather in the pop star's cap.