How likely is it that Aaron Judge leaves the Yankees for the Red Sox or another team in the offseason? 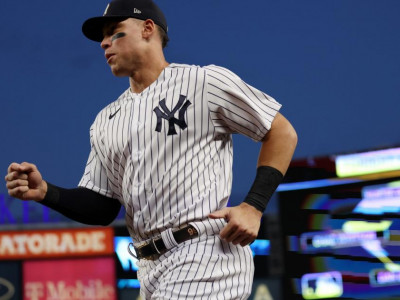 Aaron Judge is having a career year. The Red Sox are stuck in baseball purgatory at the bottom of the American League East. Boston is on its way to missing the playoffs for the third time in four seasons.

With the division getting better (looking at you, Orioles), things could get much worse for the Sawx in the near future.

You know what could help them change their fortunes? A 6-7, 255-pound, five-tool behemoth who is in the hunt for home run history and a Triple Crown.

The Judge free-agent chase has been a topic of discussion this year, and with the Yankees outfielder poised to break Roger Maris' American League record of 61 homers, the talk will surely ramp up.

Could Judge swap Yankee pinstripes for the Sox's cherry red, white and navy blue in the offseason? The Sporting News assesses the likelihood of that happening. Red Sox fans can dream a little.

Judge bet on himself in 2022. He rejected the Yankees' seven-year, $213.5 million offer before Opening Day — general manager Brian Cashman made the terms public "for transparency's sake."

The offer's average annual value (AAV) was $30.5 million. That's a lot of money, no doubt. But it's below market value for Judge, who has long been one of the best players in the game and now has a rock-solid case for being the best player in the game. The contract would have put Judge on par with Chris Sale, George Springer and teammate Giancarlo Stanton in terms of AAV, but it wouldn't have adequately reflected his status as a generational talent.

Judge and the Yankees agreed to a one-year, $19 million year to avoid arbitration this year. Given his numbers — he's on track to win the Triple Crown as well as break Maris' home run mark — it seems likely that Judge will at least test the waters.

Judge will have a host of admirers after his performance this season. The Red Sox have had a front-row seat for a lot of the Judge show, not just this year but for his career.

And Judge's all-fields hitting approach will serve him well in any park, including Fenway. His improvement at the plate this season is clear to see: His Baseball Savant profile reads like an apple orchard — red dots all over.

Any team could use his production, including the Red Sox. They'll just have to open the checkbook.

When he was asked early in the season about how he would feel playing in front of the Red Sox faithful, Judge was respectful in his response.

"We'll talk about that at the end of the year,” he said.