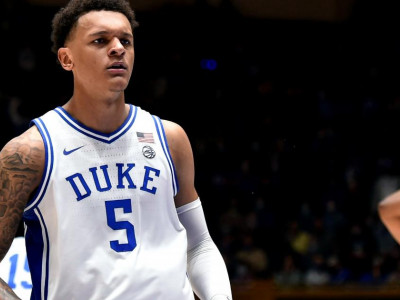 The NBA Draft gives teams a chance to fill needs and develop prospects with the hope of finding a player who can stick with the franchise long-term.

It doesn't always work out that way, though.

As we've seen plenty of times in the past, franchises can swing and miss on a prospect who never pans out or reaches their ceiling, leaving the team regretful for passing on a player who could have changed their fate for the better.

Every year, there are a few players who, if they improve one or two skills, fill out their body or correct a few minor flaws, could turn into franchise-altering talents. But if those skills remain unrefined or the player doesn't fit in the situation they're selected into, their talent and potential can fall by the wayside. That's the risk of the draft.

On the flip side, there are always a handful of players who could be deemed "safe" picks because of how their skillset translates to the next level, they already have a body that is ready for the NBA or their flaws aren't as pronounced.

These are the six players I believe are the safest selections in the 2022 NBA Draft.

What makes him a safe pick: This one is simple. Banchero is a 6-foot-10, 235-pound forward who can not only create his own shot, but can also create for others with advanced playmaking skills. In today's increasingly positionless NBA, it would be a massive advantage to have a playmaking shot-creator with his size who can play alongside virtually anyone.

Banchero has an NBA-ready body, can score from all three levels of the floor, has a solid handle, great court vision and the tools to be a versatile defender. I couldn't be more confident that he is going to succeed at the next level, regardless of where he is drafted.

What makes him a safe pick: Ivey's burst of speed, change of pace and athleticism to finish around the rim makes him a can't-miss guard prospect in today's pick-and-roll-heavy NBA. He has good size at 6-foot-4 and 200 pounds, and he has a relentless motor that is reminiscent of players like Ja Morant and Russell Westbrook.

Ivey is a capable playmaker and he can make an impact with or without the ball in his hands, casting a hypothetical safety net on his potential because of his flexibility to play in any backcourt.

While an inconsistent jump shot could challenge the idea that he's a "safe" pick, Ivey improved his jumper from his freshman to sophomore season, and he'll still find ways to score and create for others until he polishes that skill.

MORE: Could Ivey become the best prospect in the 2022 NBA Draft class?

What makes him a safe pick: At 6-foot-8 and 215 pounds with a reported 6-foot-11 wingspan, Murray's frame screams defensive versatility — and that's not even his biggest draw as a prospect.

Murray is an effortless scorer who can get a bucket from anywhere on the floor. He was one of the most efficient scorers in the country this past season, averaging 23.5 points per game while shooting 55.4 percent from the field and 39.8 percent from 3. Because he doesn't need to dominate the ball to rack up points, he can fit on any NBA roster. He doesn't force offense, he works hard on defense and crashes the glass with a ton of energy.

His plug-and-play nature makes me confident that Murray can work in any situation.

What makes him a safe pick: I could understand some pushback on this one since Daniels shot 25.5 percent from 3 and needs to work on his jumper, but I'm so confident in his defense and feel for the game as a playmaker that I think he'll succeed no matter what.

At 6-foot-8 with a 6-foot-11 wingspan, Daniels is the type of switchy defender NBA teams are looking for these days. He can defend 1-through-4 with ease and takes pride in being a defensive stopper. He can orchestrate an offense with the ball in his hands, always making the right reads when he attacks. He can score with his trusty floater or he can play off-ball and thrive as a cutter.

If his jump shot comes along, that's when you'll see his potential rise even higher. But even this current version of Daniels is ready to make an impact in the NBA.

MORE: Dyson Daniels' time is now: On fitting today's NBA mold and hopes of evolving into a Luka Doncic-type

What makes him a safe pick: You know exactly what you're going to get with Williams – a prototypical rim-running big in today's NBA. Williams is a towering defender at 7-foot-2 with a 7-foot-7 wingspan and a 9-foot-9 (!) standing reach. He's an elite shot-blocker and rim protector, and he's mobile enough to hold his own on switches on pick-and-rolls.

He runs the floor well and will serve as a great safety valve as a lob catcher. There aren't any signs that he'll develop any sort of jump shot, but even still, Williams will provide everything you need as a vertical threat and defensive anchor.

What makes him a safe pick: As a 22-year-old, Agbaji will be the oldest player selected in the first round, but his age and experience will be an asset, as he is ready to enter an NBA rotation immediately.

Agbaji was always seen as an NBA-level defender with speed, length and athleticism. The cherry on top was developing into a 40.9 percent 3-point shooter during his senior season, improving his perimeter shooting every year in college.

Agbaji is everything you can ask for in a 3-and-D player in today's NBA. He'll run hard in transition and create easy buckets as a cutter. He can knock down catch-and-shoot 3s and he's always locked in on the defensive end. He's the glue guy that any team could use.