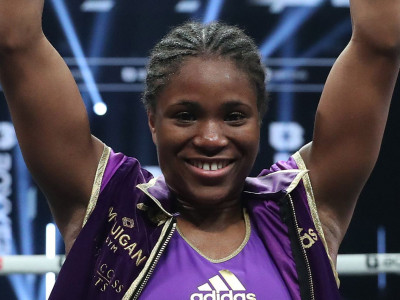 Caroline Dubois wants to take women's boxing "even further" after being inspired by Katie Taylor's historic victory over Amanda Serrano, according to promoter Ben Shalom.

Taylor retained her status as undisputed lightweight world champion with a thrilling split decision win over Serrano on April 30, in what was the first women's contest to headline New York's famed Madison Square Garden.

Dubois, who delivered a devastating knockout victory in her second professional fight in March against Martina Horgasz, revealed that watching the Taylor-Serrano bout has only heightened her ambitions.

"I spoke to her after watching Taylor-Serrano," Shalom told Sky Sports News. "And she has ambitions to take the sport even further,"

Dubois is part of a BOXXER roster stacked with women's talent, with world champions Savannah Marshall and Natasha Jonas having recently been joined by Dubois' fellow Tokyo Olympians Lauren Price and Karriss Artingstall.

Shalom added: "Caroline is 21 years old and seeing things like that is amazing for her, amazing for Lauren Price and Karriss Artingstall - all Olympians, all women with huge futures.

"To see the sport in such a big place, they hope that they're the ones that make it even bigger. We believe they'll all be world champions very soon. It's a great time for women's boxing and we believe we've got the best women's stable, possibly in the world."

Fury 'still training' despite retirement talk I 'Fighters do come back'

Khan: Love for the sport wasn't there anymore | It's been wonderful

Dubois has been back in training following her March outing, but her return to the ring has been pushed back to enable her to travel to America to watch her brother Daniel Dubois in action, who like her is trained by Shane McGuigan.

The British heavyweight is taking on American Trevor Bryan for the WBA 'regular' heavyweight title on June 11 in Miami.

"Caroline will be out at the end of June," Shalom added.

"She's going to watch her brother against Bryan and then she'll be back out."