Erik ten Hag: New Manchester United boss in discussions over plans for summer and next season 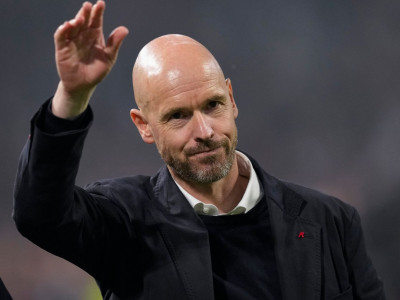 Erik ten Hag is in talks with Manchester United over his plans for the club over the summer and next season but has said “there is a lot of work to be done”.

Ten Hag, who was appointed United manager last month, took charge of his final game as Ajax boss on Sunday with a 2-2 draw at Vitesse, having already led them to the Eredivisie title.

Following the game, the 52-year-old said he will not be part of Ajax's post-season trip to Curacao as he turns his attention to the United job. However, he has not officially started work at Old Trafford and will not be in Manchester this week. Ralf Rangnick remains in charge.

He said: "Yes, there will be a party tomorrow [Monday] with the entire staff, but that will be it then.

"No, I will not be joining them [to Curacao]. That is correct, I think that's understandable.

"Regarding the staff, there are several things that need to be organised. And also regarding the team and over the next several days, or actually as of tomorrow [Monday], we will be focusing on that intensively."

The Dutchman is reportedly keen to bring his assistant from Ajax, Mitchell van der Gaag with him, as well as include Steve McClaren, a former assistant to Sir Alex Ferguson at United, as part of his coaching staff.

United are sixth in the Premier League with a win at Crystal Palace on the final day of the season guaranteeing Europa League football next season, although if they lose they could finish seventh.

Meanwhile interim boss Rangnick, who was appointed Austria manager last month, is set to move into a consultancy role at United.

Ten Hag, who signed a three-year deal at United which can be extended by a year, will become the club's fifth permanent manager since Sir Alex Ferguson retired in 2013.

Murtough is understood to have flown out to Amsterdam to see the Dutchman on Thursday morning. While the pair have been in dialogue since the appointment, intensive discussions over transfers and strategy were parked until Ajax had won the title.

It has been reported that ex-England boss and former United coach Steve McClaren, who worked with Ten Hag at Twente, and his current assistant Mitchell van der Gaag were also in attendance.

Ajax confirmed on Thursday afternoon that Club Brugge's Alfred Schreuder - formerly an assistant to Ten Hag at the Dutch side - will succeed him as head coach this summer.

Barcelona's Frenkie de Jong is one of the midfielders Manchester United are interested in signing this summer, but no deal is imminent.

De Jong helped Ajax reach the Champions League semi-finals in 2019 before he moved to Barcelona in a £75m deal.

United are expected to sign at least one midfielder this summer, with Paul Pogba, Nemanja Matic and Juan Mata set to leave Old Trafford.

De Jong has two years left on his Barcelona contract and their financial problems may mean they are willing to sell this summer.

Talks have been held about a potential deal, but the failure to qualify for the Champions League will count against United if Barcelona decide to sell.