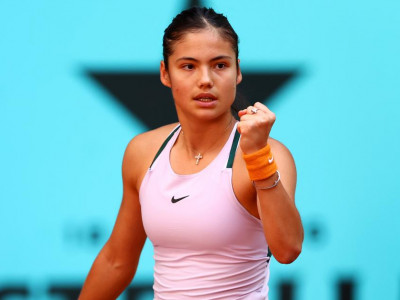 Since then, the 19-year-old’s debut season on the WTA Tour has proved to be a steep learning curve.

Injury, illness, coaching changes, defeats and some memorable wins have all been part of the story since, as Raducanu adjusts to the relentless demands of elite-level tennis.

Here, we sum up her story so far ahead of a keenly anticipated French Open debut at Roland Garros.

To say Raducanu’s march to glory at Flushing Meadows was unprecedented probably underplays it to a large degree.

In what had come to be a familiarly dominant performance, her powerful play from inside the baseline inspired a 6-4 6-3 victory over Leylah Fernandez in the final.

She did not drop a set in the entire tournament, having become the first qualifier in the men’s or women’s game to win a Grand Slam title.

At that point, Raducanu had not won a match at a WTA event. The US Open was only her fourth tour-level event. A run to the last-16 of Wimbledon had been incredibly promising but victory at her second slam blew any remotely reasonable expectations out of the water. A star had been born in New York.

Raducanu won two and lost three of her subsequent 2021 matches, falling in her first outings after byes at the rescheduled Indian Wells and the Upper Austria Ladies Linz, either side of reaching the quarter-finals of the Transylvania Open.

This year began with a 6-0 6-1 defeat to Elena Rybakina at the Sydney Tennis classic and her WTA Tour record in 2022 is won seven, lost nine.

That includes a second-round exit against Danka Kovinic in straight sets at the Australian Open, where Raducanu claimed an impressive 6-0 2-6 6-1 win over former US Open champion Sloane Stephens in a box-office round one encounter.

Caroline Garcia was another notable scalp at Indian Wells before Raducanu fell in three sets to Petra Martic in the round of 32.

Not that anything Raducanu produces should necessarily be a surprise since her US Open exploits, but a recent upturn on clay courts has come as a welcome boost for the British teenager.

Her first victory over a top 50 player this season came over Tereza Martincova of Czech Republic at the Billie Jean King Cup in Prague last month, before Raducanu reached the quarter-finals of the Porsche Grand Prix in Stuttgart.

She lost 6-4 6-4 to Iga Swiatek but acquitted herself well against the imperious world number one, who won her fifth straight tournament at the Italian Open this weekend.

Raducanu retired during her first-round match in Rome against Bianca Andreescu, having progressed to the last 16 at the Madrid Open. Her record on the red stuff this year is won five, lost four.

Raducanu is currently ranked 12 in the world by the WTA, which will mean a seeded place in the French Open draw.

Her run in Stuttgart meant a career-high ranking of 11, although expect that high figure to level out later in the year when she defends the bulk of her ranking points at Wimbledon and the US Open.

Raducanu was trailing 6-2 2-1 against Andreescu in Rome when she withdrew due to a back injury. The problem had been hampering her during the Madrid Open.

"After Madrid, I thought that maybe taking one, two days off, it would just go away because a lot of the other small niggles I've had, they've kind of gone away after taking two days off,” she said.

The Andreescu match was her second retirement loss of the season, having pulled out of a deciding set against Daria Saville at the Guadalajara Open with a hip injury.

Blisters on her racquet hand hindered Raducanu at the Australian Open, while foot blisters meant a painful experience at the Billie Jean King Cup.

A positive COVID-19 test last December saw Raducanu miss the Mubadala World Tennis Championship in Abu Dhabi, while she also sat out an Australian Open warm-up tournament in January having just come out of isolation.

In the afterglow of her US Open success, Raducanu parted company with Andrew Richardson, citing the need to link up with a coach who had high-level WTA Tour experience.

Former British number one Jeremy Bates worked alongside her at Indian Wells last year before Raducanu settled on the appointment of Angelique Kerber’s former coach Torben Beltz in November.

However, ahead of the Madrid Open, Raducanu revealed the duo had split. In a statement, she thanked Beltz for his "professionalism and dedication".

"He has a huge heart and I have enjoyed our strong chemistry during the time together,” she said. Iain Bates, the LTA's head of women's tennis, accompanied Raducanu in Spain - something the player described as an "interim" measure as she plans to move to a "new training model". Italian Ricardo Piatti has been linked with the vacancy.