Michelle Obama Speaks Out on Reproductive Rights Amid Nationwide Rallies 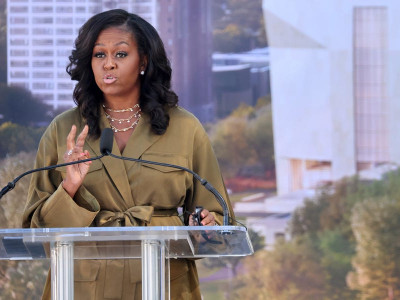 Michelle Obama has spoken out in support of reproductive rights.

The former First Lady shared her thoughts on the recently leaked Roe v. Wade opinion draft yesterday, as thousands of people participated nationwide abortion-rights rallies during the Bans Off Our Bodies Day of Action. In addition to applauding the participants marching across the country, the philanthropist also emphasized the importance of voter action as abortion rights may fall into state lawmakers' hands in the near future.

"It's been a tough couple of weeks since we saw the leaked SCOTUS draft opinion on abortion," she wrote on Twitter. "Even if we knew the courts were heading toward this day, it doesn't make the frustration, grief, and fear any less real. But we don't have to stand idly by while others try to turn back the clock on progress."

"I'm so inspired by everyone out marching today," she continued. "And I know that we're going to see so many folks carrying this energy forward to the elections in November and in every election after that."

Obama also posted a similar message on her Instagram, along with graphics from her nonpartisan initiative When We All Vote, which aims to advance civic education for voters of every age.

"If any of you are questioning whether or not your vote matters, I get it. But remember that state lawmakers are the ones who will determine whether abortion is safe, legal, and accessible in your communities. And we are the ones who determine our state lawmakers. So when you get home from marching, check your voter registration status with @WhenWeAllVote and encourage others to do the same at http://WhenWeAllVote.org," the message concluded.