Phoebe Dynevor's Minidress Is Inspiring Us to Get Dressed for Spring 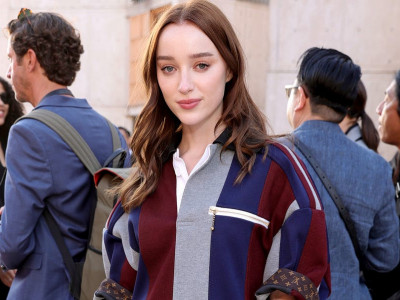 The actress appeared wearing a long-sleeved minidress from the French fashion house. The dress consisted of thick stripes in navy blue, maroon, and gray, as well as a black collar, a zipper pocket, and the Louis Vuitton logo on the cuffs. She added a feminine touch to the boxy look by wearing a pair of caramel knee-high heeled boots.

The Bridgerton star repped Louis Vuitton at the 2022 Met Gala, where she wore a sultry sheer black gown with a peplum skirt from their spring 2022 collection.

The night before, she opened up attending her first-ever Met Gala in an interview with BAZAAR.com.

"It’s one of fashion’s biggest nights that really celebrates the industry and champions creativity and self-expression. I haven’t been before, so I’m super excited and intrigued, also nervous, it’s a big carpet," she said at the time.

She also sung the praises of her stylist and the French label. "I work closely with the brilliant Nicky Yates—I don’t know what I would do without her," Dynevor said. "I am also very lucky to work with Louis Vuitton. Nicolas [Ghesquière] is a genius, and I love how he creates such strong and empowering female silhouettes with each of his designs and collections."