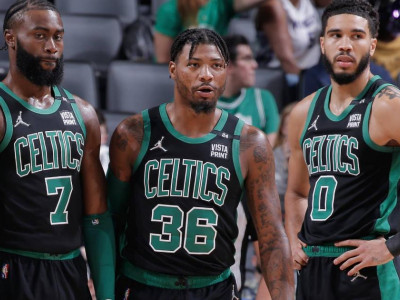 As the Celtics gathered for Media Day ahead of the 2022-23 season, the absence of head coach Ime Udoka, who was handed a one-year suspension for violations of team policies, loomed large over the proceedings. The team convened just days after the news of Udoka's suspension and the ensuing press conference in which president of basketball operations Brad Stevens announced that assistant coach Joe Mazzulla would take over as interim head coach for the upcoming season. After falling just two wins shy of the 2022 NBA title, Boston could not simply focus on the prospect of the 2022-23 campaign as the team faced questions about its leadership and how recent events will impact its preparation for the year ahead. Here is how the Celtics players addressed the recent situation impacting the franchise. MORE: How Celtics executives addressed Ime Udoka's suspension at press conference After developing a strong relationship with Udoka at the FIBA Basketball World Cup, Tatum was a big reason that the Celtics opted to make the hire in 2021. Like many others, Tatum expressed that he is having a difficult time processing the information, especially given the timing of the news and the momentum that was built through last year's run. I guess I feel like everybody else, it's a lot to process. Unexpected, especially coming into this season and you feel a certain way — coming off of last year — that you're excited and trying to do all these things. It's just a lot, if I'm being honest. Along with everybody else, just still trying to process it all knowing that we start practice tomorrow. "It's just a lot. If I'm being honest... you're still trying to process it all knowing we start practice tomorrow."Jayson Tatum reacts to Ime Udoka suspension pic.twitter.com/0GYY4wKfC7— Celtics on NBC Sports Boston (@NBCSCeltics) MORE: Meet the new Celtics interim coach for the 2022-23 season Brown, whose relationship with Udoka also dates back to their time with USA Basketball, expressed that he has not spoken with Udoka since the news of his impending suspension broke last week. While Brown expressed that his sentiment was shared among the rest of the players, he also tried to look past the situation and speak on what the team can do moving forward. We were all shocked with what was going on, a little confused. A lot of the information wasn't being shared with us or members of the team, so we can't really comment on it… Nobody really has any of the information, so it's kind of difficult to really make a comment on how things were supposed to go, how the process went or anything, so the best thing we can do is put our best foot forward. "We were all shocked... a little confused. A lot of information wasn't being shared with us."Jaylen Brown addressed Ime Udoka suspension pic.twitter.com/83RxCqy7Og— Celtics on NBC Sports Boston (@NBCSCeltics) Smart, the longest-tenured Celtic and reigning Defensive Player of the Year, was very candid in his response to the news, telling reporters that "it's been hell for us," according to Sports Illustrated's Chris Mannix. He continued, adding that "we're just in the wind, like everybody else. The last couple of days have been confusing." Confusion and picking up the pieces to move forward were common themes from the Celtics and especially Smart, whose influence is evident across the locker room. "we couldn't believe what we were hearing, especially at the time we were hearing it."Marcus Smart talks about the timing of hearing about Ime Udoka's suspension pic.twitter.com/PKzoEycKXr— Celtics on NBC Sports Boston (@NBCSCeltics)
Read full news…
More news