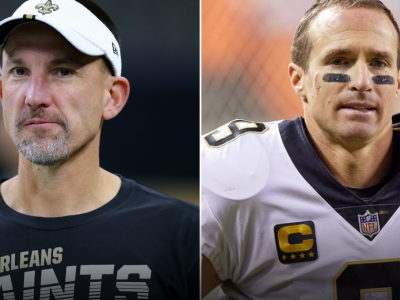 Drew Brees made some waves on Sunday when he seemingly implied that there was a chance he could return to the NFL.

Brees took to Twitter to deny a report from Andrew Marchand of the New York Post that Brees was out at NBC after just one season. The former Saints quarterback said that he was "currently undecided" about his future, and said that he could play football again.

Despite speculation from media about my future this fall, I’m currently undecided. I may work for NBC, I may play football again, I may focus on business and philanthropy, I may train for the pickleball tour, senior golf tour, coach my kids or all of the above. I’ll let you know— Drew Brees (@drewbrees)

MORE: Why NBC reportedly "soured on" Drew Brees as successor to Cris Collinsworth

Naturally, Brees' comment about a return to football got many talking and prognosticating about where he could land if he decided to play again. The chatter got so loud over the next 24 hours that Saints coach Dennis Allen had to address the situation.

“My wife’s the one that told me about it because I don’t follow social media," Allen said of Brees' tweet Monday, per the New York Post. "So I thought, 'That’s interesting, that’ll bring up some questions.'"

So what did Allen — who replaced Sean Payton as New Orleans' coach after the long-time head coach opted to retire — make of Brees' comment? He didn't think it was serious in the slightest.

"I think it was a comment made in jest and we certainly haven’t had any conversations in that regard.

As such, it seems that Brees, 43, will remain retired. But maybe — just maybe — if there's an itch to play, he could find a team willing to take him on. NBC's Peter King notes that the Panthers could hypothetically be "desperate enough" to pursue Brees, and they were also tied to Payton not long ago.

And the Saints don't exactly have a settled starting quarterback, either. They have Jameis Winston, Andy Dalton and Ian Book on the roster; Winston is probably the best of the bunch, but he is coming off a torn ACL and will no longer be working with Payton as his coach.

Still, it seems far more likely that Brees, who dealt with a throwing shoulder injury during the final years of his NFL career, will stay off the field. He may not stay at NBC, but he could be an analyst option for Fox, which has at least one color commentator opening on its top two broadcast teams for the 2022 season.

In short, Brees has options. Maybe returning to the NFL is something that he is legitimately considering, but that's all just speculation. And those hypotheticals are something that Allen would very much like to avoid.

"I don’t really want to live in those hypothetical worlds right now," Allen said. "We’ll see where it all goes. But certainly, he caused a lot of interest, that’s for sure."