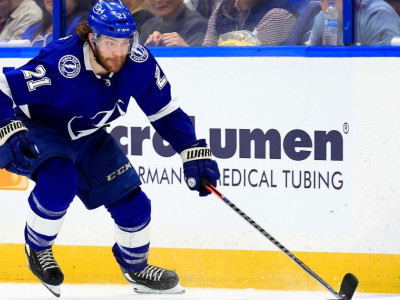 Point attempted to stop a puck along the boards in the first period and as he turned, it appeared his right leg gave out. He laid down for a few seconds, clutching his right hip before hobbling off the ice. He immediately headed down the tunnel to the locker room.

He returned for the second period and tried to play a shift, but it was clear he was still in pain.

If Point is out, that is a huge loss for the Lightning who now turn their action to a second-round series with the Florida Panthers after getting past Toronto in Game 7.

Point was a major factor in the Lightning's Stanley Cup wins in 2020 and 2021. He had 14 goals in each of the two postseasons, leading the team both times.

The exact injury is not known. It does seem as though it is with his right leg, perhaps near the thigh area.

It does not look like there was any contact from Maple Leafs' defenseman Mark Giordano, who was the closest player to Point on the play.

On Monday, Lightning head coach Jon Cooper said that Point is doubtful for Game 1 of Tampa Bay's second-round series against the Florida Panthers.

Jon Cooper said Brayden Point is doubtful for Game 1 but is day to day after.— Joe Smith (@JoeSmithTB)

Cooper did follow up to say that Point is considered day-to-day.

Given his body language and reaction from teammates on the bench in Game 7, it's hard to believe Point will be returning to the lineup any time soon.

Patrick Maroon and Anthony Cirelli consoling Brayden Point who looks devastated after still feeling shaken up on his first shift back in the 2nd period pic.twitter.com/pbylgEO2DH— Harman Dayal (@harmandayal2)