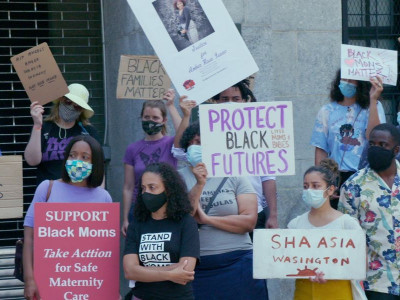 The two women came together to direct Aftershock, a 90-minute Hulu documentary film that highlights not just the numbers and data behind the rising mortality rates for Black women in the United States, but the everlasting grief that affects the families and communities these women leave behind.

"I've been working on raising awareness about the high rates of infant mortality in the United States for a while now," Lee tells BAZAAR.com. "Infant mortality and maternal mortality are the markers of the health of a nation of infants and mothers—and our nation's not doing well. In my travels around the country talking to groups of women, inevitably I would hear a story about somebody who passed away from childbirth complications. I wanted to figure out what was happening in my community. Why are women dying at such high rates? What can we do about it? How do we improve birthing outcomes in this country? It's really as simple as that: wanting to raise awareness and save lives."

As for Eiselt, her own experience with child loss and dissatisfaction with the U.S. birthing system inspired her dedication to the cause. She knew that as a white woman in America, she was receiving far better attention than those less fortunate than her.

"I came to this work as a mother and as an artist. I'm a mom of four, and I've had my own traumatic birth experiences, one of them resulting in a second-trimester loss. I know what it's like to not be seen and heard within this system," she shares. "It wasn't until 2017, when a slew of articles came out really announcing to the media that the U.S. was the most dangerous place in the industrialized world to give birth in, and that Black women died a rate at three times the rate of white women, that I really understood that we were in crisis. I read the story of Shalon Irving, who was a CDC epidemiologist who was studying health inequity and died postpartum after complaining multiple times that she was not feeling well, and it touched me to my core. I wanted to use my skill set as a filmmaker to uplift these stories."

Aftershock explores the aftermath of two Black women who died tragically at the hands of the American health care system, Shamony Gibson and Amber Rose Isaac. It exposes the ways their passings, like those of so many Black women in the United States, are intrinsically linked to medical racism, a dire misunderstanding of how Black bodies work, and even slavery. The film was produced at a crucial time for America: when the COVID-19 pandemic, the height of the Black Lives Matter movement, and the rising maternal crisis all intersected.

For both Eiselt and Lee, making the documentary provided a chance to demonstrate how no amount of preparation, research, or prior knowledge can prevent medical neglect. Shawnee Benton Gibson, the mother of Shamony, offers a prime example of this. Benton Gibson had participated in Black maternal advocacy work for years ahead of her daughter's passing. She knew what doctors often dismissed and she knew what to pay attention for — but that didn't stop her daughter from suffering from complications two weeks after giving birth. Shamony's doctors dismissed her symptoms as run-of-the-mill post-partum pain, but it was, in reality, a pulmonary embolism that ultimately took her life.

"Shawnee is the guiding light of the story. It wasn't until we met Shawnee that we had a real film. We were doing research, there are articles out there, but until you find the people that you're gonna get that human-to-human connection with, that audiences will just be completely enraptured by, you don't have a cinematic experience," Eiselt says. "Shawnee turned that pain into power and her grief into immediate activism. When Shamony passed, she immediately hit the ground running, because it was so important to her that this never happen to anyone else."

The film bolsters its emotional anecdotes with plenty of data, relaying at one point that Black women are four times as likely to die from birth complications than their white counterparts. And little has been done to counteract that.

"It was really important for us to show that that data reflects real people. We wanted to put the human face on the numbers that people are talking about," Lee explains. "There's been a narrative when Black women die from maternal health complications that somehow the outcome was their fault, whether they're not getting the care they need or they don't take care of themselves. We really wanted to shift that so that people could see that Shamony and Amber were healthy, vibrant, active women. They were working women, both college educated, and both with wonderful families around them—and yet, they still died. It's a systemic issue. We really felt it was important for people to understand what that impact is like for the children, for the partners left behind, for the parents, and for the entire community."

While Aftershock delves into our nation's past to connect the historical atrocities of slavery and racism to our current crisis, it also provides a look at a hopeful future. Another storyline the film follows belongs to Felicia Ellis and her husband, with Felicia deciding late in her pregnancy to deliver at a birthing center rather than a hospital, depicting what it looks like when a Black woman has full agency over her birth experience.

"She was fortunate that where she was in Tulsa, there was a birthing center that she could access. She was fortunate that she had the $3,000 that she could pay out of pocket for that birthing center," Eiselt says. "To be able to witness having the support of the midwives, her doula, and her husband; to see what that birth could be for all of us—I still cry when I watch it because it's so, so beautiful. It's wonderful to see when everything lines up for a woman to be able to have the best outcome possible. And that's what we want: a safe, dignified birth of your choice."

There's no question that Aftershock demands attention on the crisis at hand. But it's just the beginning, and more work needs to be done to turn the Black maternal death rate around.

"Black maternal health will improve when, as a country, we come to understand that white women are not doing as well as their European counterparts and that Black women are the canary in the coal mine for what is coming and what is happening to white women," Lee says, referring to a business-driven rise in c-sections as another concerning factor that affects far more than just Black women. "As Nubia Martin says in our film, if it were white women dying at these rates, it would be a national crisis. So when people wake up and understand that's what's happening to Black women is actually happening to white women and is going to get worse for them, I think that's when unfortunately we're gonna see a change."

And for Eiselt, she hopes the public reaction to the film inspires a communal change in the way women approach the birthing experience.

"I really hope that the film facilitates a conversation that helps us shift the way we think about birthing culturally in the United States. What should birthing in America in 2022 really look like, and how do we get there?" she says. "You can choose to have a midwife. You can choose to have a doula. You can choose to birth in other settings, and it's a human right to put yourself first and to have that power to push back and demand evidence-based care. Having a good birth doesn't mean just surviving—that's the lowest possible bar. You should thrive. You should have a dignified birth. You should feel good about your birth experience. You should be heard."