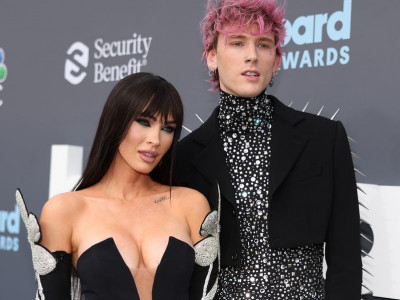 Last night, the two showed out at the 2022 Billboard Music Awards, where they coordinated in some seriously edgy black ensembles.

The Jennifer's Body actress looked ravishing in an elegant black gown by David Koma, which featured a dramatic V-cut and a pelvic-grazing leg slit. She also wore a pair of the London-based designer's famous crystal embroidered floral gloves, which nearly reached her shoulders.

Meanwhile, Machine Gun Kelly made his own fashion statement in a dramatic suit from Dolce & Gabbana. The outfit involved a sparkling turtleneck top layered under a cropped black blazer. Long silver spikes studded the edge of both his blazer and his trousers, and his black leather shoes were also dotted with silver details.

Fox's and Kelly's looks were more than just fashionable; the couple added a charitable component too. Jewelry company Marrow Fine and nail art brand Nails of LA teamed up to design an 11.4ctw diamond manicure for Kelly's Billboard Music Awards appearance. The 880-diamond nail set is worth $30,000 and will be upcycled after the show into a collection of 10 limited-edition rings to be sold via Marrow Fine's website. All the proceeds will go toward raising money for a Cleveland-based charity.

"I'm honored to partner with Nails of LA to design this manicure for Machine Gun Kelly and Megan Fox," Jillian Sassone, the founder and creative director of Marrow Fine, says. "Machine Gun Kelly and Megan Fox are one of the most featured and fashionable couples of the moment, so to design something so unique and bring awareness to such an important cause was an offer I simply could not refuse."