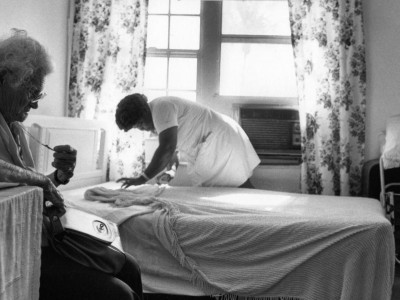 In her six years of experience working as a caregiver in the suburbs of Chicago, Myrla Baldonado—a human rights organizer who emigrated from the Philippines to the United States in 2006—had served 30 different clients. Out of those 30, she was sexually harassed by eight.

On one particular evening in the middle of winter, she says that her client’s husband had attempted to sneak into her room in the dark. While she feared what he might do to her as she lay in bed, she didn’t know where to turn for help.

“What are you going to do?” she recalls asking herself. “I just hid somewhere else and locked the door.”

It’s not an experience unique to Baldonado. Since her days of toiling as a caregiver in Chicago and now working as a full-time organizer at the Pilipino Workers Center of Southern California, the 68-year-old advocate says that she’s come across plenty of fellow domestic workers who have been subjugated to similar cases of sexual violence while on the job.

“It’s hidden. It’s practically behind the curtains. It’s really invisible work,” she says. “And it’s one that people don’t pay attention to.”

The “invisible” work that the approximately 2.5 million domestic workers in the United States perform involves tending for elderly or sick clients, looking after young children or babies, cleaning, cooking, laundering, gardening, caring, and any other task one might deem as a basic, critical function of a private household. And while the absence of this labor would assuredly cause a stoppage of all other forms of work—because home is the place where workers go to begin—domestic workers are by and large left to fend for themselves against perpetrators of sexual harassment and assault.

The U.S. has long excluded domestic workers—as well as other historically marginalized sections of labor, like farmworkers—from safeguards granted under landmark New Deal–era legislation like the National Labor Relations Act, the Fair Labor Standards Act, and the Social Security Act. Their omission was by design. In assuring disgruntled Southern Democrats that they wouldn’t have to pay increased wages to the Black women who worked for them, former president Franklin Delano Roosevelt said, “No law ever suggested intended a minimum wages and hours bill to apply to domestic help.”

Domestic work has historically been done by those on the fringes of society. Traced back in time, this work was performed by Black women held under chattel slavery and, later, those paid poverty wages during the Jim Crow era. Today, more than 90 percent of domestic workers are women, and over half of them are Black, Hispanic, or Asian American/Pacific Islander women, according to a 2020 report published by the Economic Policy Institute. They tend to be older than those in other professions and are three times as likely to be living in poverty or just above the poverty line, a circumstance only made worse by the COVID-19 pandemic. All of them are excluded from federal laws establishing basic workers’ rights.

Movement on including domestic workers under labor laws has been excruciatingly slow. Though a few amendments have extended limited coverage to some domestic workers (as seen in the amendments to the Social Security Act in 1950, the Fair Labor Standards Act in 1974, and the federal unemployment insurance system in 1976), its their exemption from Title VII of the 1964 Civil Rights Act that has de facto legalized any sexual harassment or assault perpetrated against them.

Title VII prohibits the discrimination of employees on the grounds of race, religion, disability, gender, or sex. But domestic workers often fall under the “small firm exemption,” which stipulates that those who employ less than 15 people are exempt from the act.

“Domestic work is just one worker for most of the time,” Baldonado explains. “So, what happens is that you have to have 15 workers for that law to kick in. … It should be less than 15 workers for you to be able to have a right.”

Besides the lack of legal protections, enduring sexual violence as a domestic worker is often an experience ridden with shame or embarrassment, keeping many from ever speaking out. With a significant portion of these workers coming from traditionally marginalized backgrounds, some fear retaliation from their employers who may, for example, exploit their documentation status. It’s exactly this complicated network of misogyny, racism, and classism that undergirds an oppressive infrastructure and produces a culture of silence.

“They don’t wanna lose the job,” Baldonado says. “They’re going between making a living and protecting themselves.”

In the absence of more significant strides at the federal level, a handful of states have adopted a Domestic Workers Bill of Rights, including New York, Illinois, Oregon, California, Nevada, Connecticut, Massachusetts, Hawaii, New Mexico, and Virginia, as well as the cities of Seattle and Philadelphia. But it’s a federal Domestic Workers Bill of Rights that workers like June Barrett are demanding.

“That would be my safety net,” says Barrett, a 58-year-old homecare worker and volunteer organizer at the Miami Workers Center who has worked in the field for decades. “When you don’t have a safety net, you can’t jump.”

Years ago, Barrett, who emigrated from Jamaica to the United States in 2001, was hired for a job they say they were initially excited for, because it increased their hourly wage from $9 per hour to $12. But on the first night, the man Barrett was supposed to care for asked them to get into his bed. Barrett refused.

“He said, ‘What made you think you are better than the others?’” they recall. As the job went on, the man’s behavior only worsened; he would constantly attempt to grope and kiss Barrett. “When I got this job, it was everything to me. It was more money,” they say. “But it turned into a nightmare.”

They contemplated reporting his actions to the agency that placed them there, but was unsure what that might mean for them financially if their agency had no other job lined up for them. Barrett still had bills to pay and, without health insurance, needed the steady paycheck to afford their medication.

“I stayed there until I was able to pick another job, and then that was when I left,” they explain, adding that the closed-door nature of a worker’s relationship with their employer leaves many in the dark. “We don’t have HR. We don’t have any kind of outlet. … The work itself is stigmatized. People don’t look at you as a care worker; they just see you as someone who cleans old people’s butts.”

For Barrett, the passage of a National Domestic Workers Bill of Rights is urgently overdue. Such a bill would allow for groundbreaking authorization of crucial rights that domestic workers are currently missing, including paid sick days, meal and rest breaks, fair compensation, overtime pay, and civil rights coverage under Title VII. The bill would additionally target incidents of workplace sexual violence by creating a national hotline for domestic workers, requiring a study and recommendations for survivors, and establishing a board that would investigate standards in the industry.

The Domestic Workers Bill of Rights Act was originally introduced in 2019, co-sponsored at the time by Representative Pramila Jayapal and then-Senator Kamala Harris. By 2021, the bill was reintroduced with some updates by Jayapal, who was this time joined by Senators Kirsten Gillibrand and Ben Ray Luján. It has the backing of the National Domestic Workers Alliance, President Joe Biden, and Labor Secretary Marty Walsh.

“We have been organizing for years,” Barrett says, “and now we are saying enough is enough.”

People like Barrett and Baldonado continue a long tradition of radical agency that the domestic workers who came before had proclaimed for themselves. In spite of whatever hostility or indifference they came across, these workers recognized the value in their overlooked labor and organized themselves accordingly. The early-20th century saw the proliferation of domestic worker unions from coast to coast, igniting in cities like Boston, St. Louis, Wichita, and Oakland. Some joined the more militant wings of the burgeoning labor movement, becoming active participants in uprisings or strikes. They campaigned for their own inclusion in New Deal–era laws, long before the mainstream recognized their work for what it plainly was: work.

Now, it’ll take a modern coalition that transcends the boundaries of race, class, and gender to secure their rights in the eyes of the law, Baldonado and Barrett say.

“Go out and tell your story, reclaim your rights, and be part of the movement,” Baldonado instructs. “Fight for it, because it’s hard. You will not be alone in doing that.”

The necessity of domestic work—the country’s utter and indisputable reliance on it—should be enough of a reason for people to support their cause, Barrett says.

“We are the ones who make all other work possible,” they say. “We are the ones who weave the fabrics of communities together. We take care of the elderly so they can live the last of their days with dignity and respect. We take care of the babies so people can go to work in the banks or schools or hospitals. Why can’t we get respect and dignity and protection under the law? Why not?”