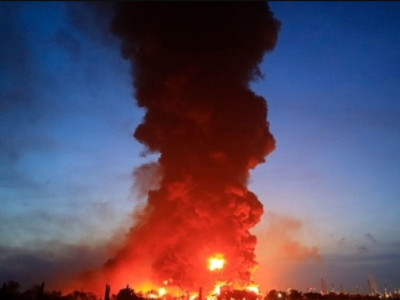 The Russian occupiers again carried out a rocket attack on an oil refinery in the town of Kremenchuk, Poltava region, as well as the territory of Poltava district, head of Poltava Regional Military Administration Dmytro Lunin said.

"Four hits again at Kremenchuk refinery. Also, the sounds of explosions were heard in Poltava district. Details later. We are not leaving shelter!" Lunin wrote on Telegram on Thursday.

As reported, on April 24 in the evening, nine Russian missiles struck the Kremenchuk thermal power plant and the Kremenchuk refinery. As a result, one person was killed, seven more were injured, the fire at the refinery was eliminated only by the middle of the next day.

Earlier, on April 2, the Russian occupiers destroyed the infrastructure of the Kremenchuk oil refinery with their shelling, it stopped working,